As a mother of three sons, I received a very special gift twenty-three years ago: A goddaughter named Layna Mestad. What a blessing I was given.

Layna loves Minnesota’s North Shore, antique shops, and like me, has kept a journal for most of her life. High on her list of things to do in life is to be a writer. I think she already is one. She’s a regular blogger for the Weisman Art Museum.

I asked her if she’d like to guest post. To my amazement, she said she’d love the opportunity. Here is her post. I love it and hope if you do too that you’ll leave her a comment.

Moon River and Me,
by Layna Mestad

Henry Mancini’s Moon River escaped my daydreams during spring break of my sophomore year at the University of Minnesota. I am the youngest of three kids, and the only girl. I, along with my two older brothers, Allen and Nick, have the quintessential big-brother little-sister relationship. They helped shape me by simply being authentic versions of themselves and letting their intuitions lead them through life. However, I never could have imagined a song from the 1960s sung by Audrey Hepburn on a fire escape would so eloquently bridge my brothers’ worlds to mine as it did.

In March 2014 I visited my brother, Nick, in Chicago over that spring break. He’d moved there five years prior to pursue becoming a skilled improvisor. He made the move right out of college with the understanding Chicago was the place that would foster his dream. 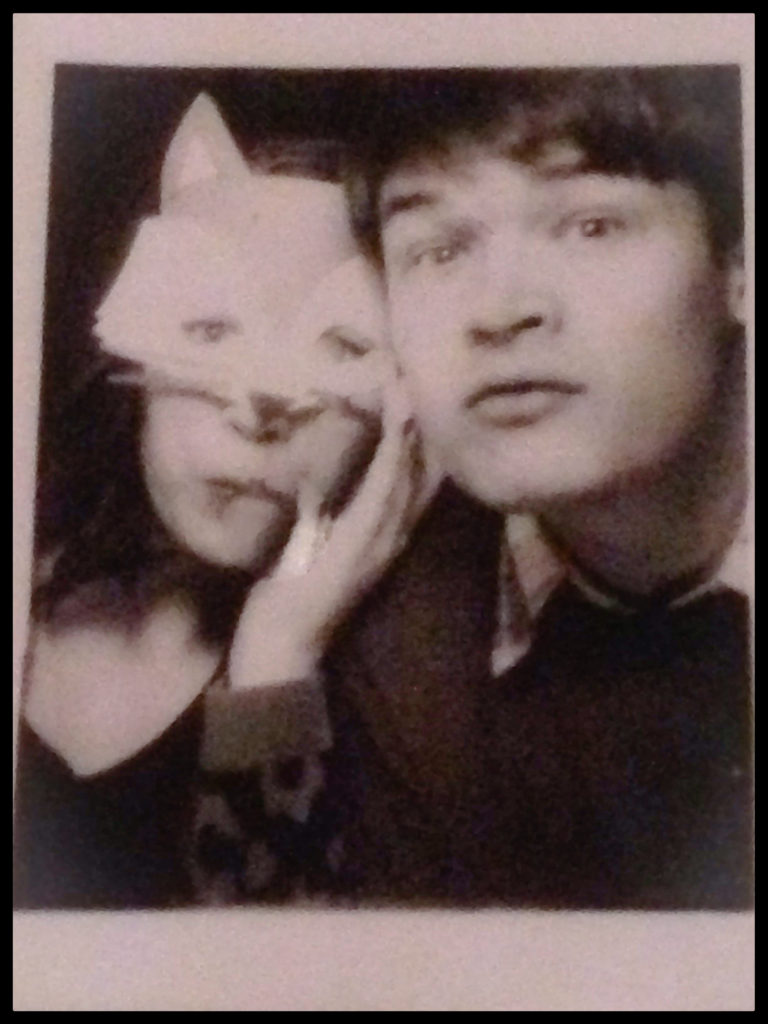 To this day, I am in complete awe of Nick and his journey to the Windy City. I have seen over the years how a dream can guide people to an unknown place, chew them up, spit them out and imprint authenticity into their being. I missed my brother back home in Minnesota, so my time with him was precious.

I was thrilled to be in Chicago, and found myself humming Mancini’s magical tune. I had seen Breakfast at Tiffany’s the summer before and was taken with the style and romance the film so eloquently depicted. 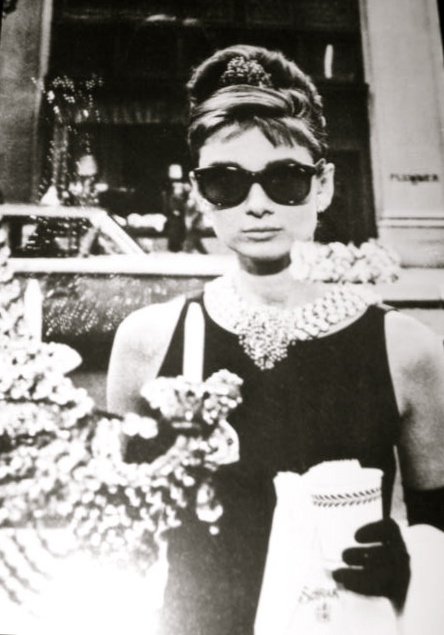 Holly Golightly (Audrey Hepburn in one of her most memorable roles in breakfast at Tiffany’s) Photo Credit: Stephanie at Flickr

I was enchanted by Holly Golightly’s romance with Paul Varjak, played by Audrey Hepburn and George Peppard. 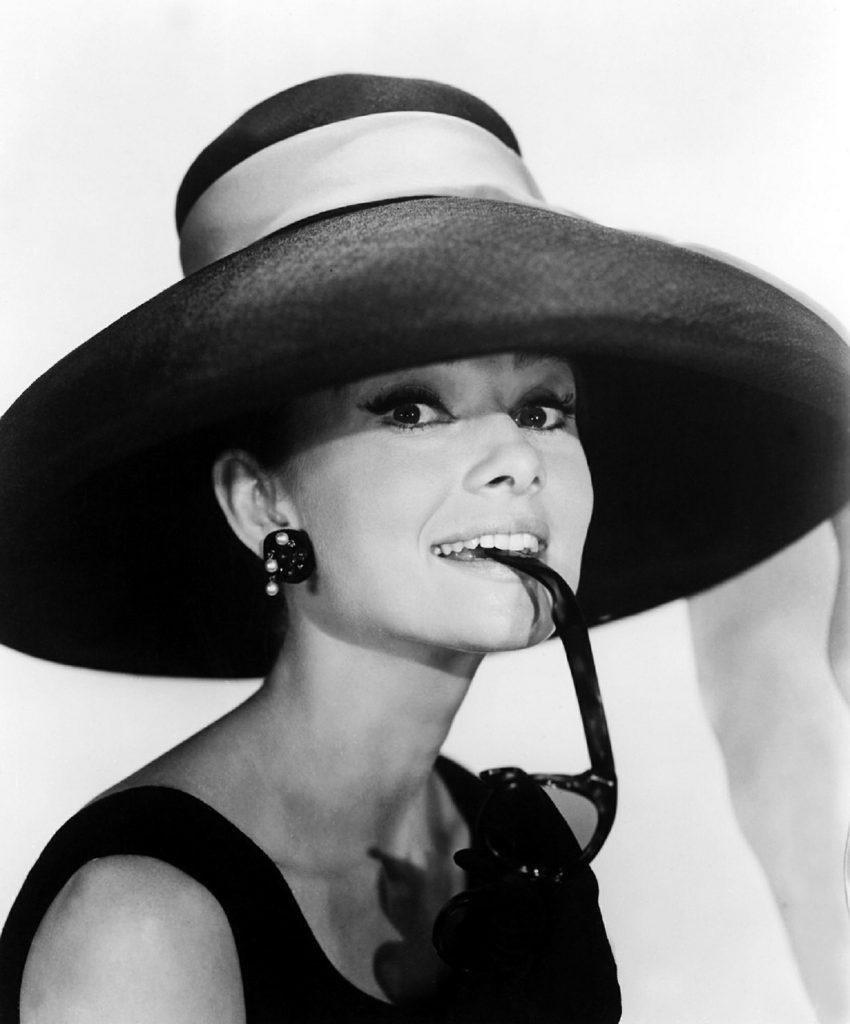 Audrey Hepburn in Breakfast at Tiffany’s

Mancini composed the film’s score, and the accompaniment of Mancini’s sound in a world starring Hepburn is simply enchanting. 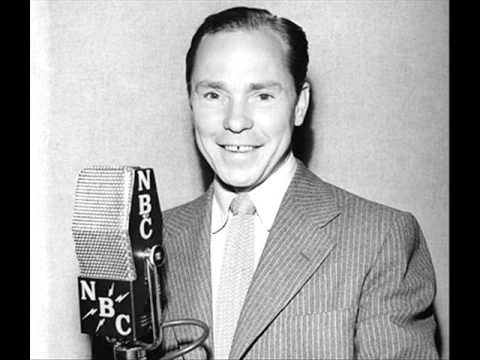 Stephen Holden wrote in The New York Times that the lyrics are about Mercer’s childhood in the south and his longing for wanderlust with his childhood friend. I believe Robert Wright of The Atlantic said it best. “This is a love sung to wanderlust,” he wrote. “Or a romantic song to which the romantic partner is the idea of romance.”

That day in Chicago, I found myself sitting on my brother’s worn futon from college dorm room past which sat atop a filthy rug full of dirt and Dorito crumbs. Apparently, cleanliness wasn’t a priority for him at this time. As I stared at the empty white walls enclosing me in the small living room, I seemed to have embraced the endless possibilities of life that flooded my mind listening to Hepburn croon Moon River.

My journal from March 2014 reads, “So, I just came across Henry Mancini’s Breakfast at Tiffany’s soundtrack. I feel so at peace with my world. Here’s to you Chicago. . . ‘Off to see the world.’ You’re right. There’s a world out there for me to see.”*

I remember exploring my brother’s new city while singing my new favorite song to myself and feeling liberated. I remember feeling like I was living in a distant dream of mine, something so far off . . . yet there I was roaming the streets of Chicago, a reality that I could only hope would someday be my own.

Exploring the Streets of Chicago

It is outside of the dreaming realm in which the wanderlust is fed. The delicate notes of this song gently guided me through my own reality. I got my heart broken to this song, I longed for love to this song, I cried to it, I smiled, I laughed, I traveled, I was inspired, I was loved, I was lost, I wrote to it, and was sent off into my future by it.

All it took was one person recognizing the potential in another to create this beautifully simplistic piece. Ginny Mancini, Mancini’s wife, told BBC News that film makers at Paramount thought they needed to dub someone else’s voice for the song in Breakfast at Tiffany’s since Hepburn wasn’t a trained singer (Jane O’Brien, BBC News). Mancini watched Hepburn sing a song in a different movie which prompted him to write a song that catered to her limited tonal range, and the rest is history. In doing so, he created a portal that sent me off to see the world.

Someday, I thought, when I find the right guy, I’ll have my brother, Allen, play Mancini’s Oscar-winning song at my wedding.

I obtained my diploma in May 2016 from the U of M. Unfortunately, I caught the flu and was not able to attend my commencement. My parents wanted grad pics so I threw on my cap and gown and covered my sick flu eyes with giant Jackie O sunglasses and smiled for Mom and Dad. Standing on the field of TCF Bank Stadium wasn’t hard, and I have my past employment status there to thank for the photo op. 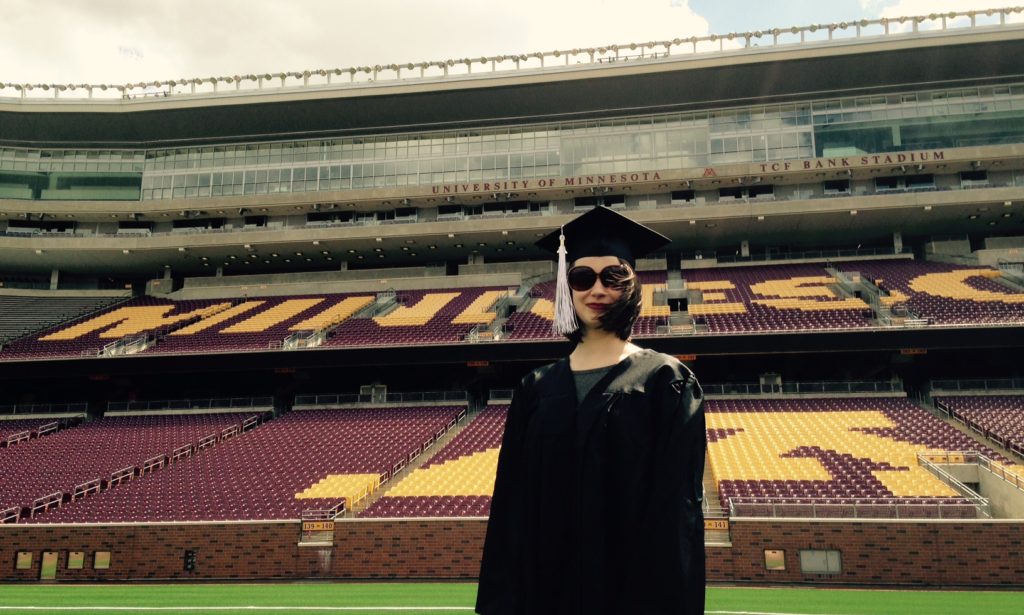 Layna Mestad upon her graduation from the University of Minnesota

Since I missed my originally planned graduation party, my parents rescheduled a small party for me a few weeks later where I was surrounded by my family.

Three notes of mellow vibrato drifted into the room before I saw Allen playing his trombone. I balled my eyes out at his surprise and sweet gesture. Later, I learned he had practiced for weeks to perfect my favorite song.

Allen surprising Layna by playing Moon River on his trombone

The moment was lovely for another reason, too. I realized wanderlust has been a true companion of mine all along. I have been and will always be a devoted traveler of my daydreams, a hopeless romantic at heart. It is truly beautiful when your dreams become your reality, when simple hope-filled thoughts travel into existence.

Being at a place of reflection, I feel like my reality are the dreams that I once had for myself. I grew up going to my brothers’ band concerts, plays and improv shows. Some of my favorite memories are of watching Allen, as part of the large maroon and gold marching band, march out of the tunnel at the Metrodome, and of Nick writing in his weathered Moleskine and making audiences laugh.

Allen and his trombone took me to many concert halls and football fields throughout the years, but my favorite destination was the University of Minnesota where I graduated with a degree in journalism several years after he marched off the field for the last time and graduated with his master’s in landscape architecture. 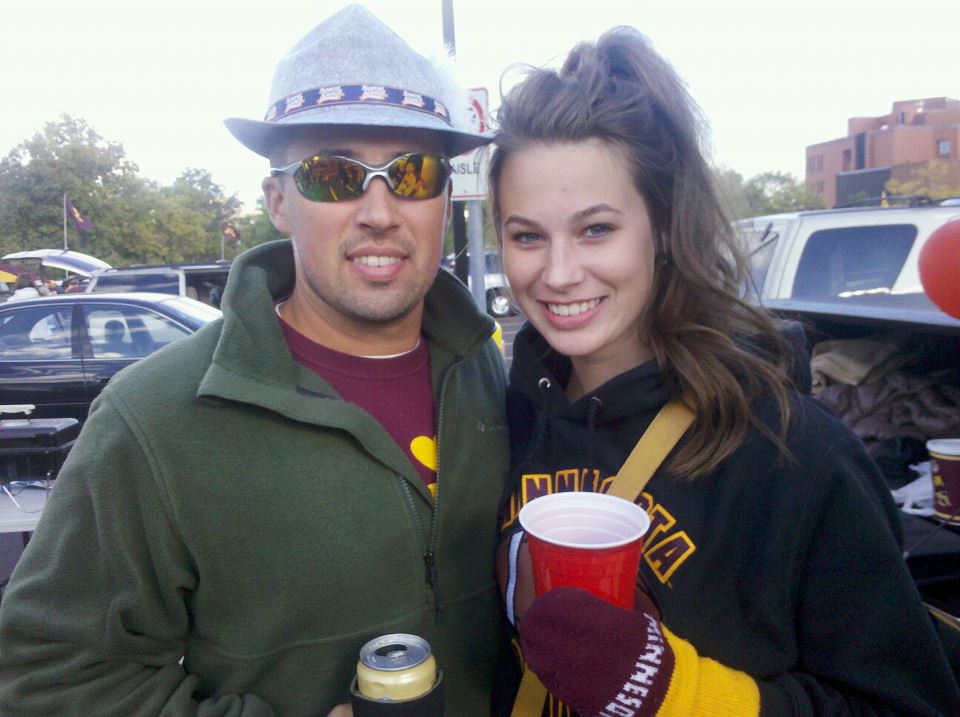 Layna with her brother, Allen Mestad

As a kid, I used to spy on Nick when he wrote on the wrinkled pages of his Moleskine, hoping to catch a glimpse at the secrets only paper-filled with a writer’s inner thoughts seem to know. I wanted to fill pages of a journal with my own world, as he did. I now have a stack of messy ink-filled journals from fourth grade up until now.

I dreamt of going to the University of Minnesota and I dream of becoming a writer. I can’t help but think of my brothers when reflecting on what I’ve wanted out of life and where I want to go.

When Allen played his trombone for me, it signified a turning point in my life. I felt as though I was being sent off into life gently guided by the melody of Moon River, an old friend.

I don’t know what the future holds for me, but I imagine a girl on her fire escape humming a tune that reminds her of the two brothers who led her to see the world by giving her a piece of their own. 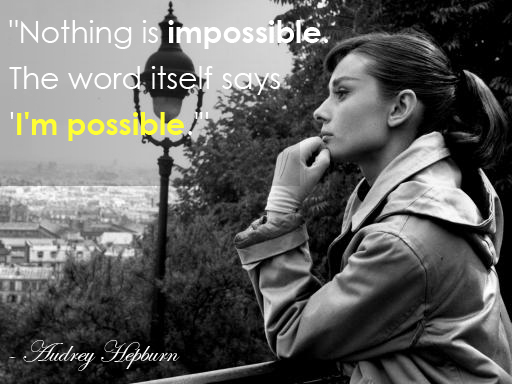 Thanks so much, Layna, for writing this heartfelt piece. I’m privileged that you would take the time to write something for my readers and might I add, I’m so proud of you!

Love, from your godmother.

Note: Photo Credit of the Chicago River Full Moon: Adam Bykowski. Photo used with permission from the photographer. Visit more of his work at www.redbubble.com/people/bykowski. Thanks so much, Adam for allowing the usage of your stunning photo. It truly captures Layna’s story.