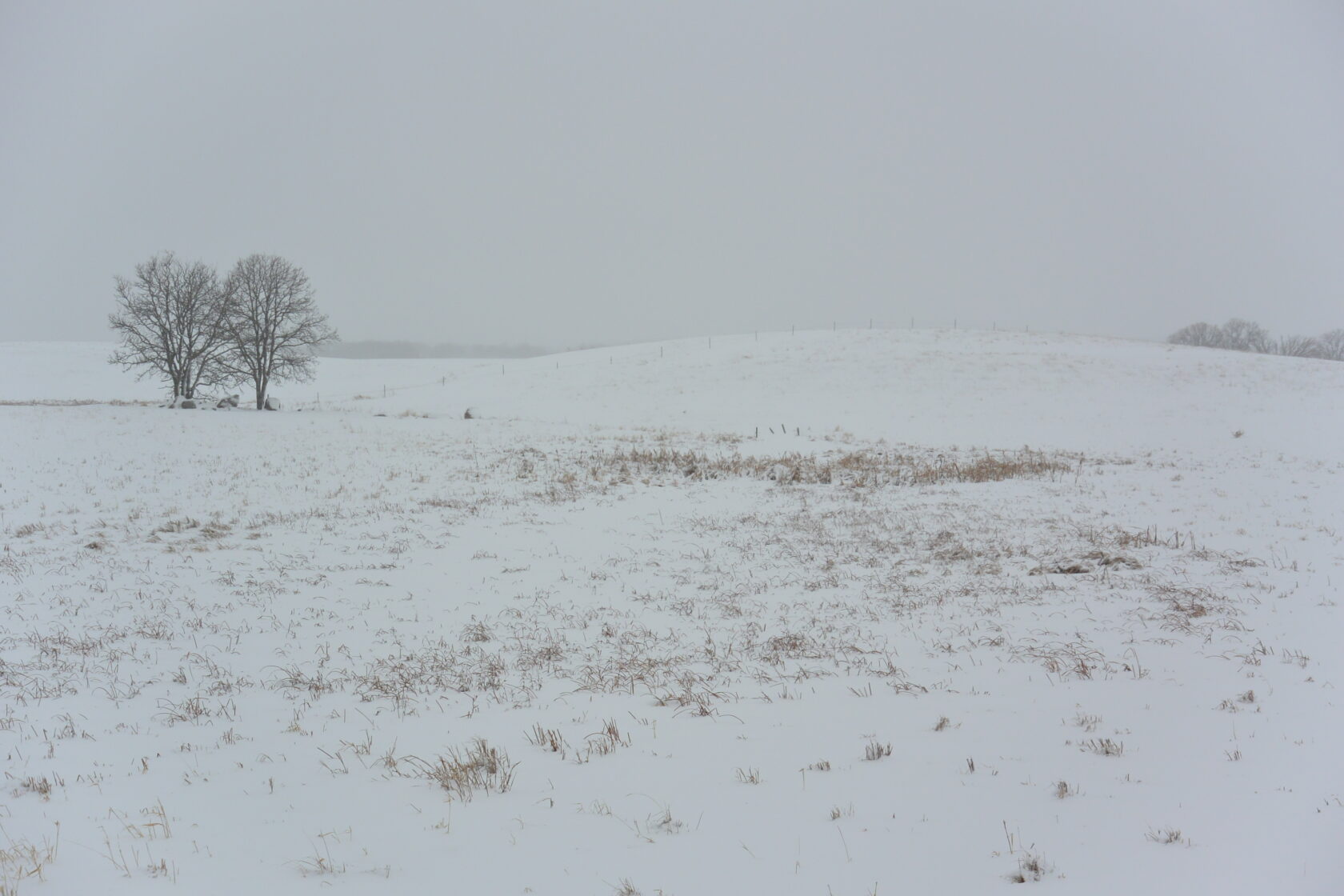 After our 2019 post-Christmas-ing, we bid adieu to our son, Jake and his wife, Jenny, as they headed back to their new home in Arvada, Colorado. Rick and I headed up to the cabin to make sure all was well. We drove separately because I wanted to stay an extra couple of days to do some writing. He got a ten-minute start. In the way-back of my mind, Rick’s words echoed in my head that supposedly there was a snowstorm in the area.

I know some of you live according to The Weather Channel or a weather app. I don’t. I know, probably bad not to in Minnesnowta, but, as I mentioned in my last post, I’m not much of a planner. However, I did put mittens, hat, and Sorels in my SUV, and off I drove.

On the drive up, I listened to Thomas M. Sterner’s “The Practicing Mind.” No sign of inclement weather. The pavement was dry until about St. Cloud.

Just past Alexandria, I saw a neon highway sign. I-94 closed at Fargo and 29. No need for me to worry if the interstate to Bismarck was closed. It was time for me to exit at Garfield and head to Richville.

As I entered the small town, I stopped at the free library and scored a book or two. I found it odd that adjacent to me a snowplow was making a twenty-foot, cone-shaped mound of snow in the middle of the road. Oh well. Who am I to question this plowing method? I waved and proceeded onward.

I love taking this way to the cabin. I’ve got seventy-five miles to go before I reach my destination. But this stretch of road is forty miles of open fields of wonder. Both Sterner’s words and the landscape serenaded me, releasing the stressful holiday celebrating. (It was fun exhaustion, though, do you know what I mean?)

Sterner’s all about staying in the present when you’ve set a goal, such as learning to become a decent photographer. He believes that if you think of yourself as being at practice in trying to learn something new, it’s a way to permit yourself to learn something without getting discouraged.

To do that, he suggests we reshift our goal-setting. For instance, instead of going to a piano concert, coming home and attempting to play perfectly what the artist performed, fail at it, and completely give up learning to play the piano, Sterner asks us to use having heard the beautiful music to motivate oneself to practice. By using this method, we avoid the snare of being or becoming disenchanted with our efforts.

He also is not a fan of the high-level world of advertising in which we live, where we’re bombarded with “all is not right until I get to such and such a point” messages, or we look in the mirror “and judge our looks based on present fashion trends and whether we fit them.”

Rather, he asks readers to readjust their mindsets and permit themselves to just be, as best they can, at the point of time that they find themselves in. His words brought to mind the soul-inspiring words of author Cecil Murphey:  “This is the best I can do at this stage of my development.” 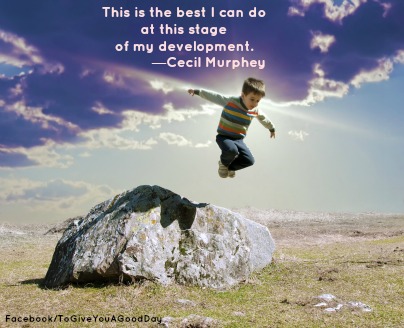 Sterner suggests we take a cue from nature, particularly a flower’s life. 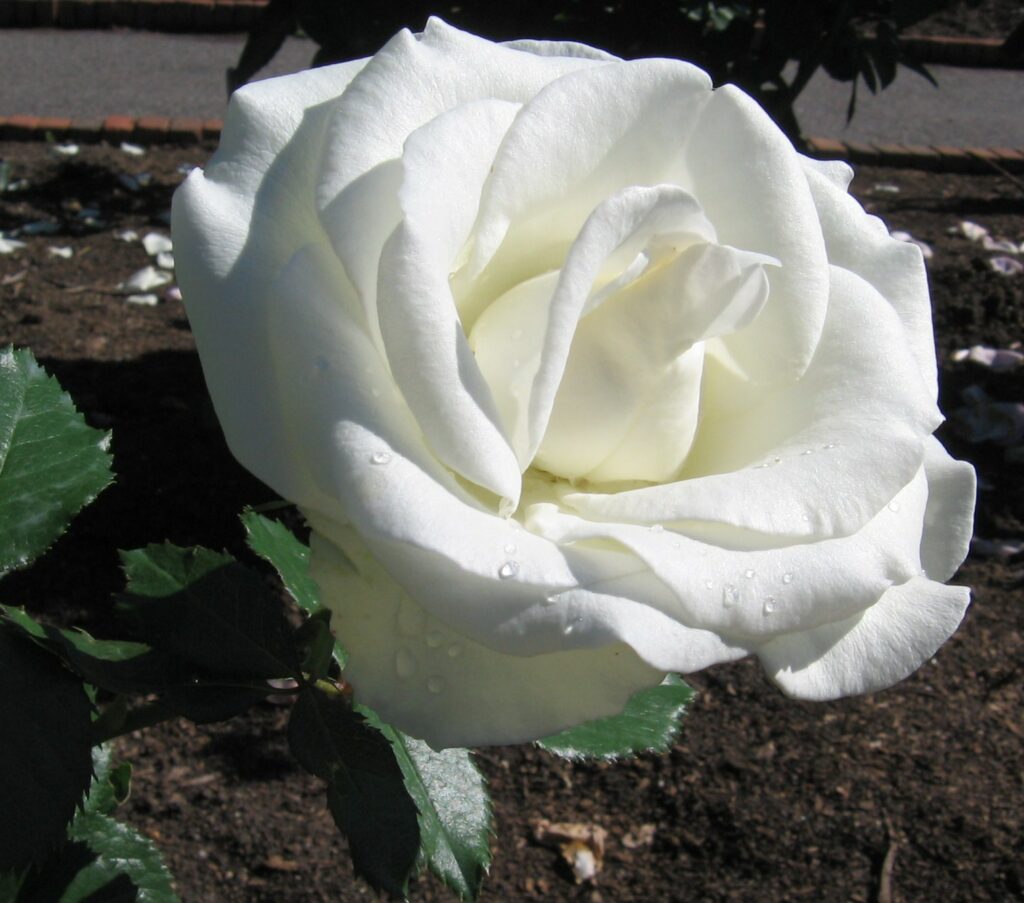 Here are his questions:

His answer: The flower is always perfect. At whatever stage of growth it’s in, it’s where it’s supposed to be.

I had brought my camera. I’m not a “photographer” but, in Sterner’s way of looking at life–that it’s all one long practice session–I wanted to capture some of the landscape before me. I pulled over, ran to the back, opened the hatch to grab my camera, and hurried back to the driver’s seat, as there was a pickup coming up behind me.

Back in my car, I put on my hazard lights. I had to seize with my camera the beauty in the barrenness. 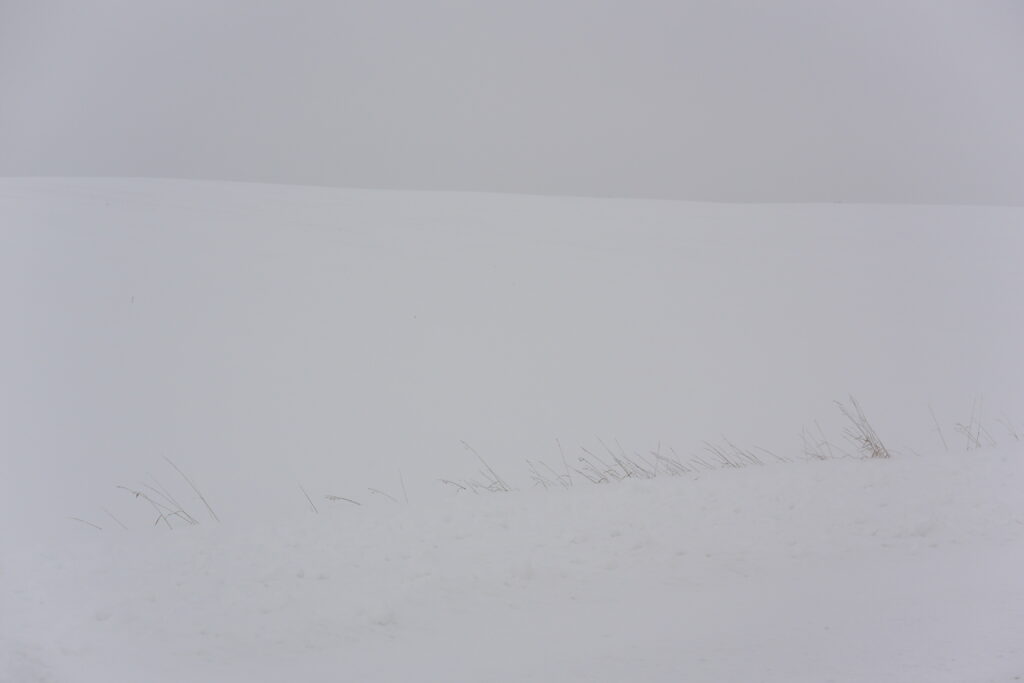 I looked ahead of me and the snow-crusted pickup, which had passed me, was stopped about fifty yards ahead of me. It had its back-up lights on. I tamped down my fear. What the heck?

Of all the gin joints in all the world, what are the odds that on this empty stretch of road the pickup was Rick’s?

How had I gotten ahead of him on the road? “Yes. Just taking some pictures.”

He stared at me, put his window up and continued. I’m pretty sure, “Coo-coo for coconuts” was dancing through his head.

I couldn’t help myself, though. Everywhere I looked, nature was in the middle of a mid-winter blossom. 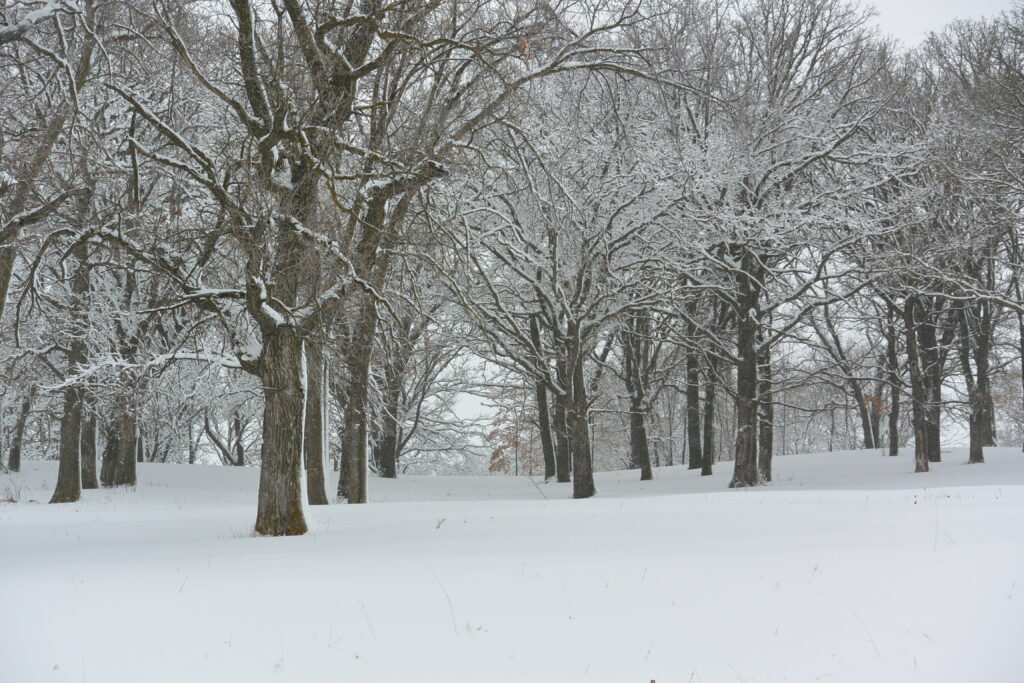 Trees all around me now had snow leaves. Even their branches. 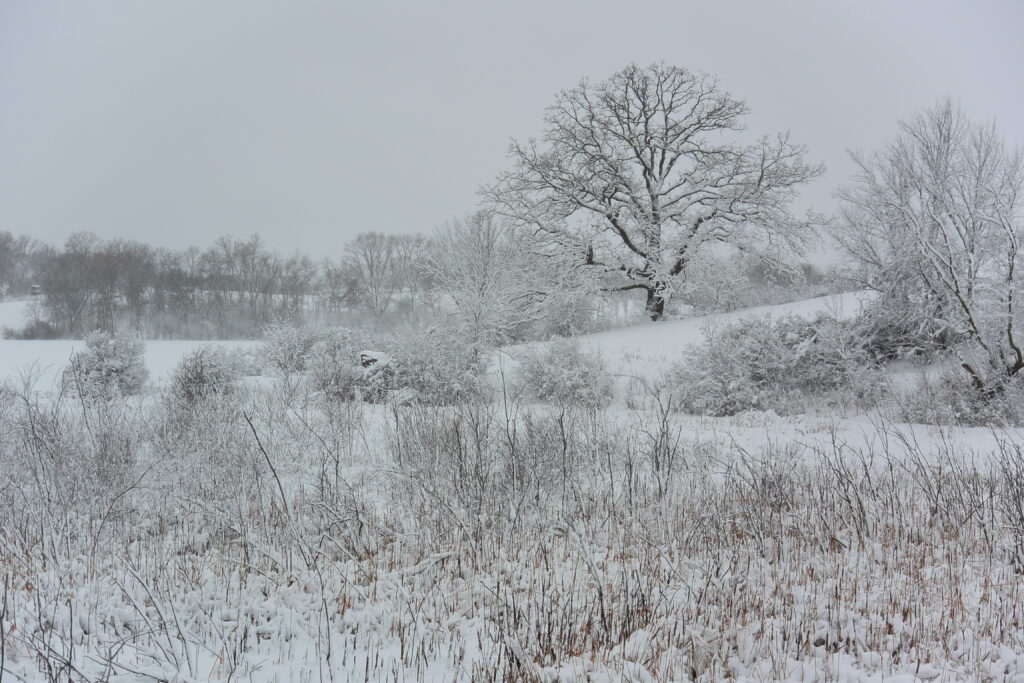 Trunks too had one-sided glue-like white moss on them. 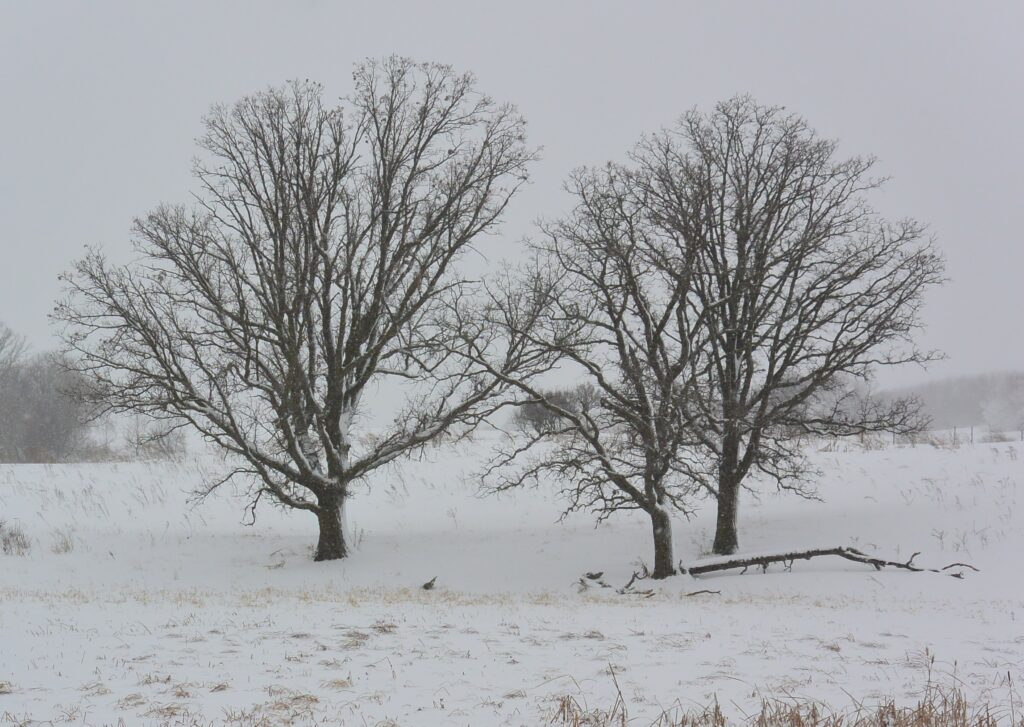 As did a barn. 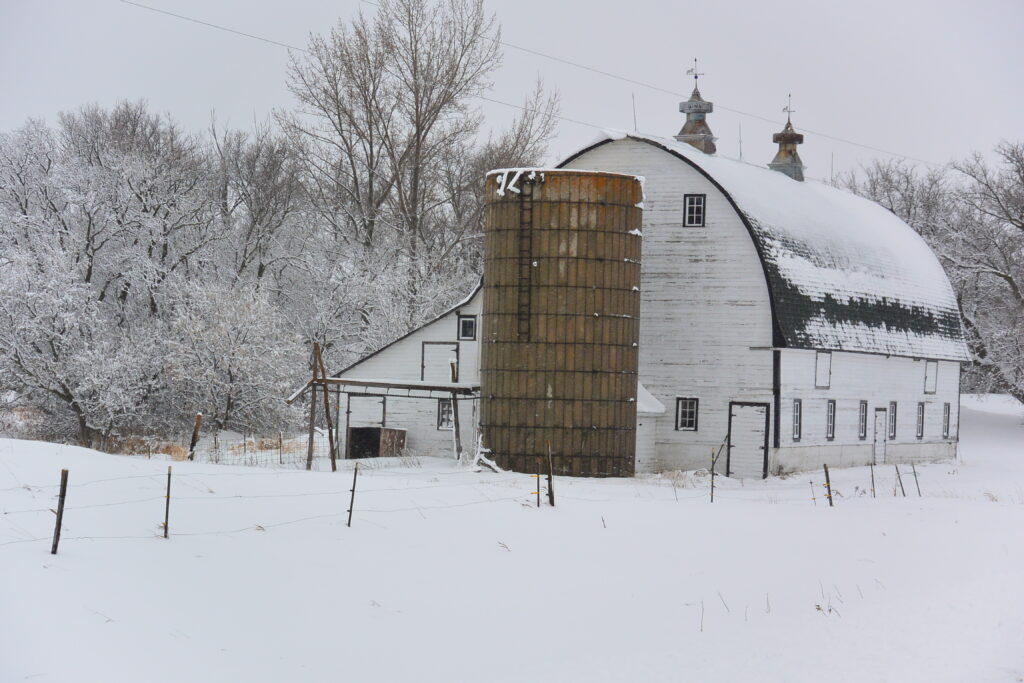 A barn along Highway 40 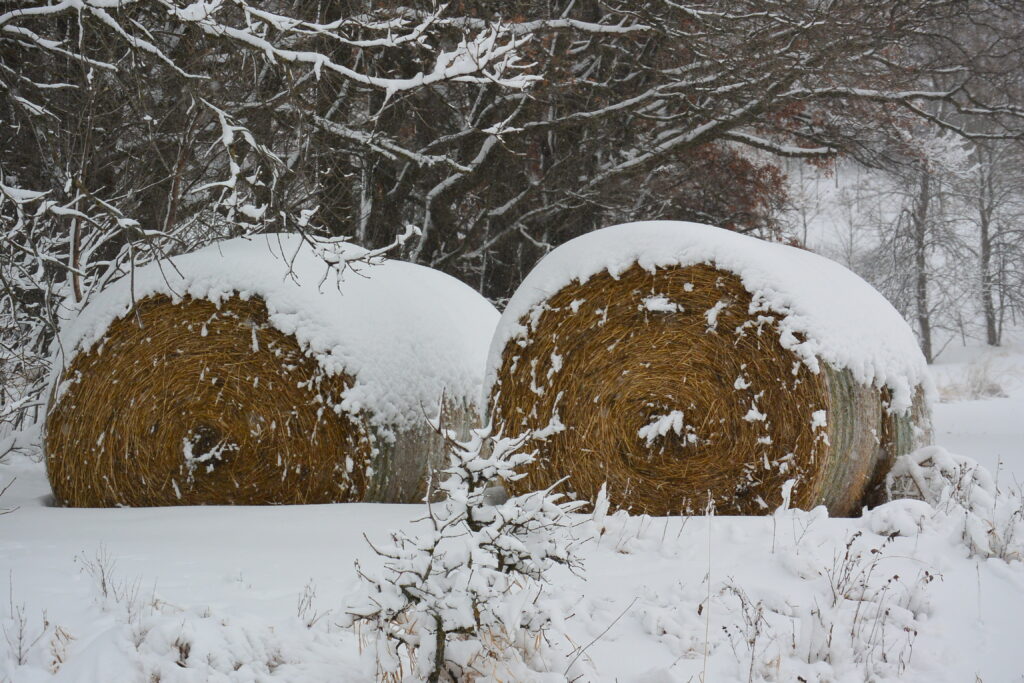 Some wore snow caps, as though they’d settled in for a long winter’s nap.

Hay bales settled in for a long winter’s nap

Ground roughage, dogwoods, and milkweed held ornament-sized plops of white berries. Weeds and brush held snow flowers in full bloom, as though they were trying to be miniature snowball hydrangea plants. 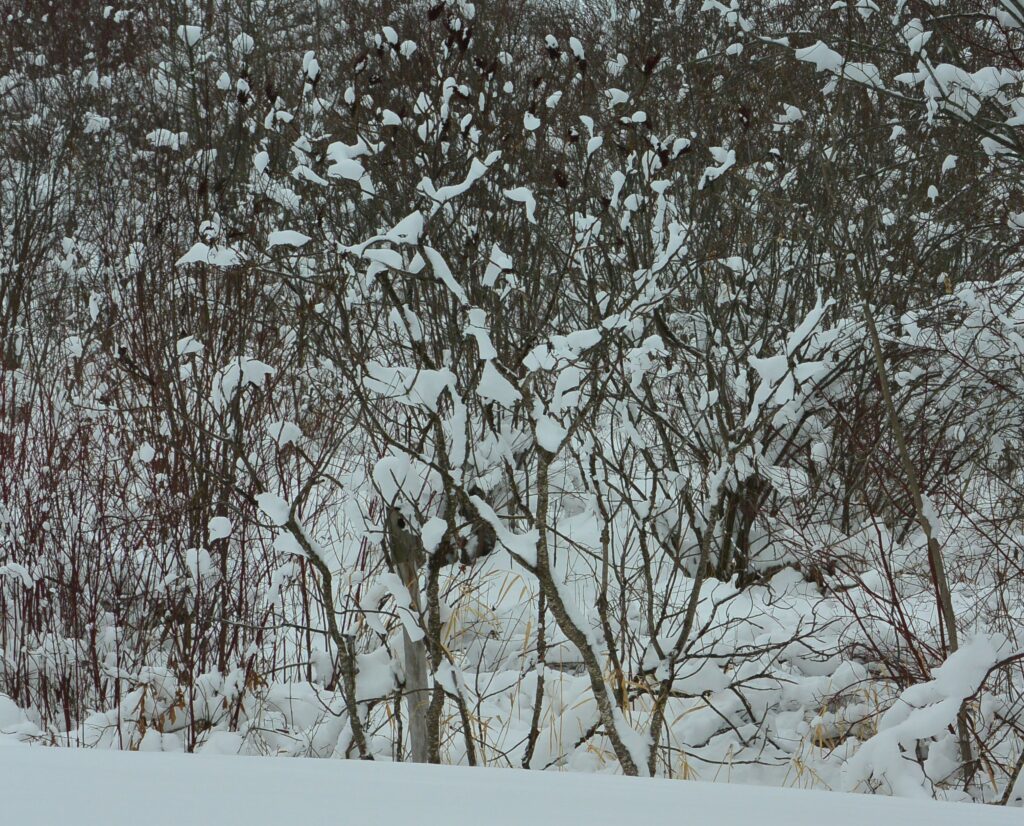 Ground trees and shrubs with snowberries

I was in the middle of Sterner’s metaphor come to life. A midwinter spring.

Mile after mile of Sterner’s ideal of flowering perfection.

About Vining, I noticed the wind had made an appearance on the giant sculptures at the gas station there. 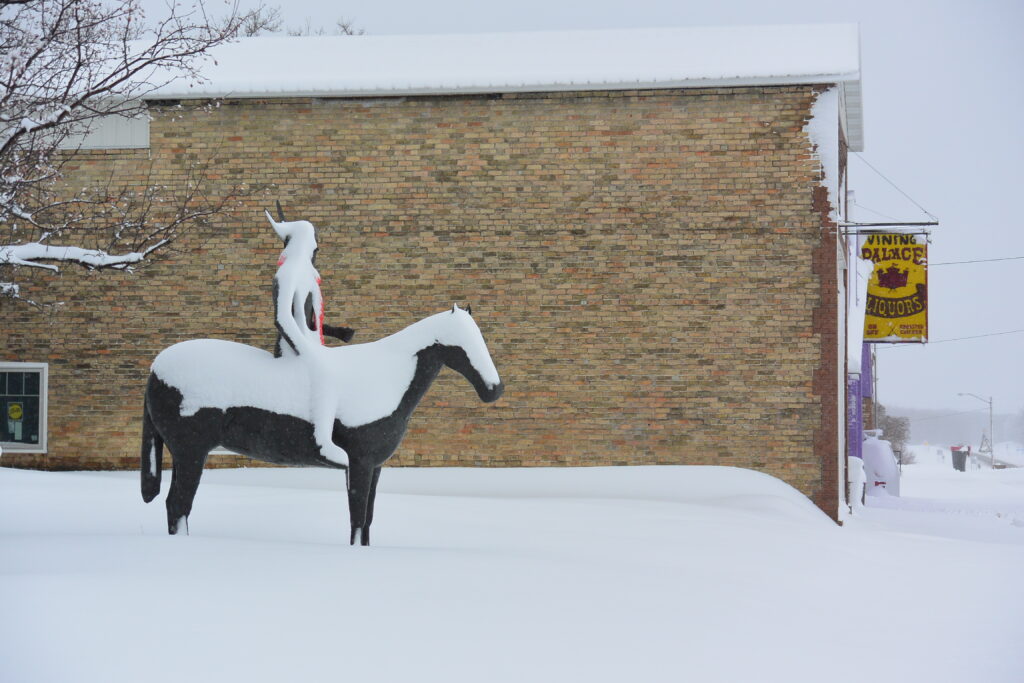 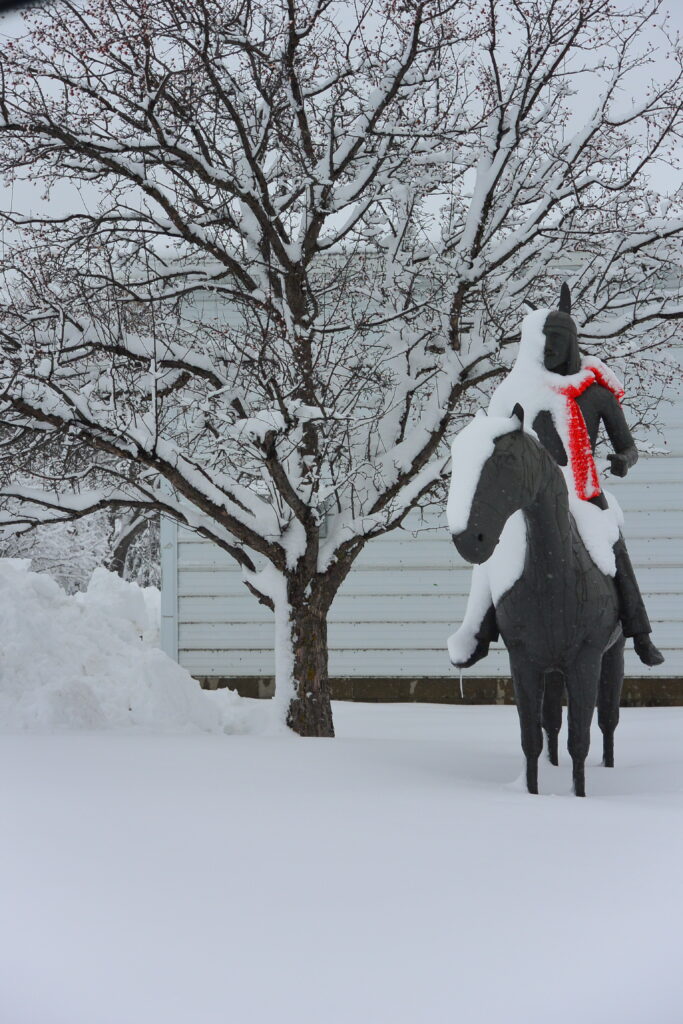 Another Sculpture in Vining 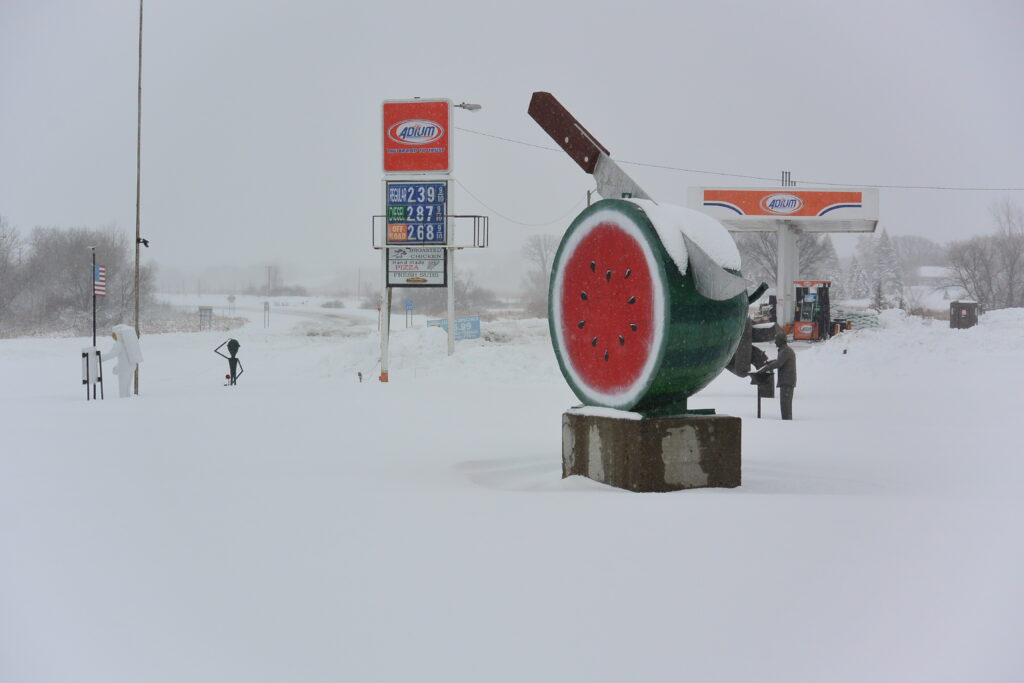 The Huge Sculptures in Vining, Minnesota 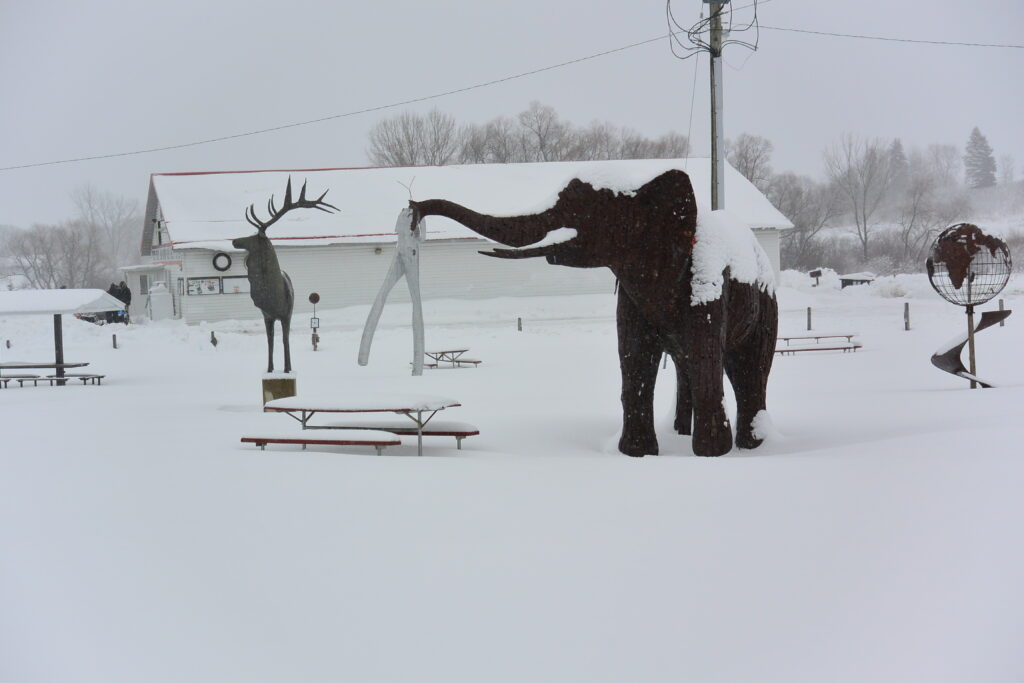 I know it looks like the elephant is holding pliers – isn’t it funny how sometimes you take a picture and it surprises you? 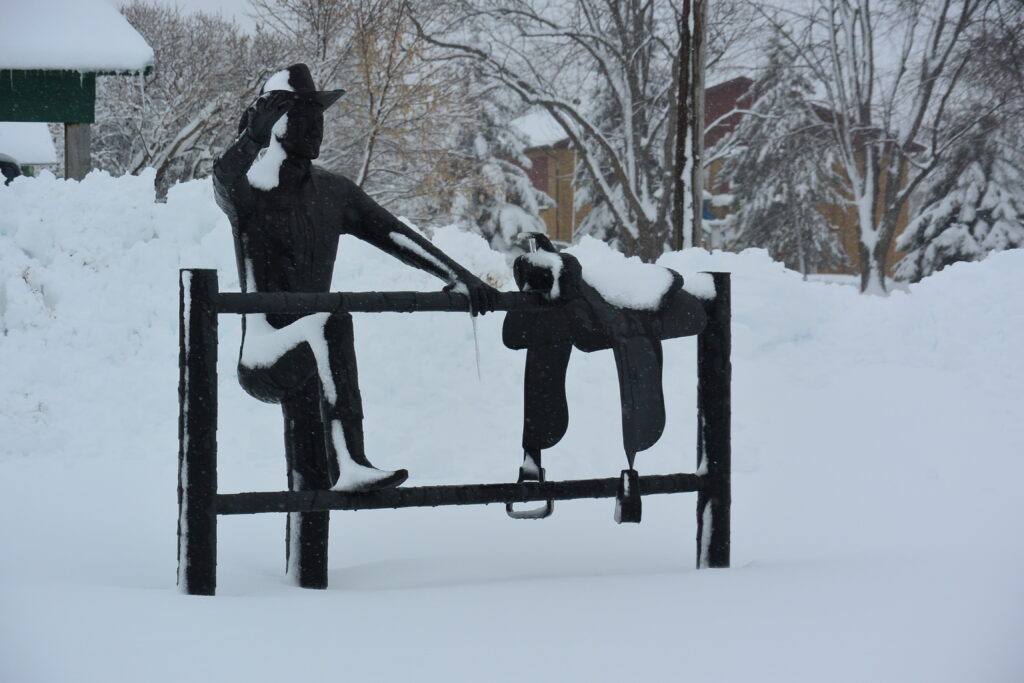 A sculpture giving me a howdy-do as I left Vining, Minnesota

I had the road to myself. The time or two I did see a vehicle, it was either a plow or a pickup with a plow. I couldn’t help myself. White blossoms were everywhere. Every bend in the road, I put on my hazard lights and stopped to smell the snow roses. I was, in a “live” way, putting Sterner’s words into practice, practicing my photography skills with what nature gave me. 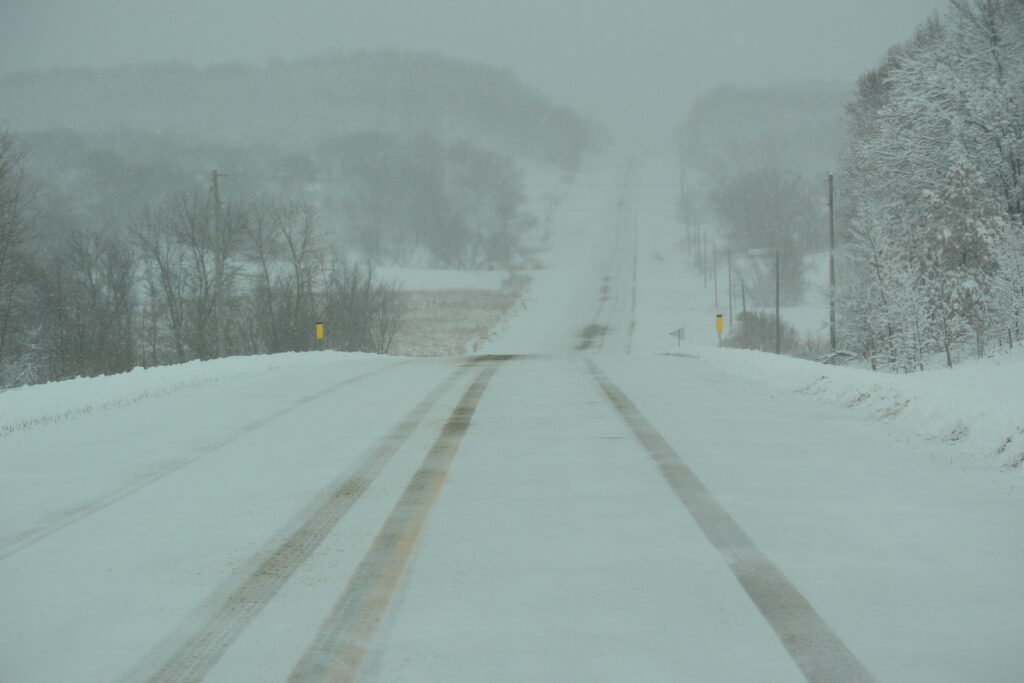 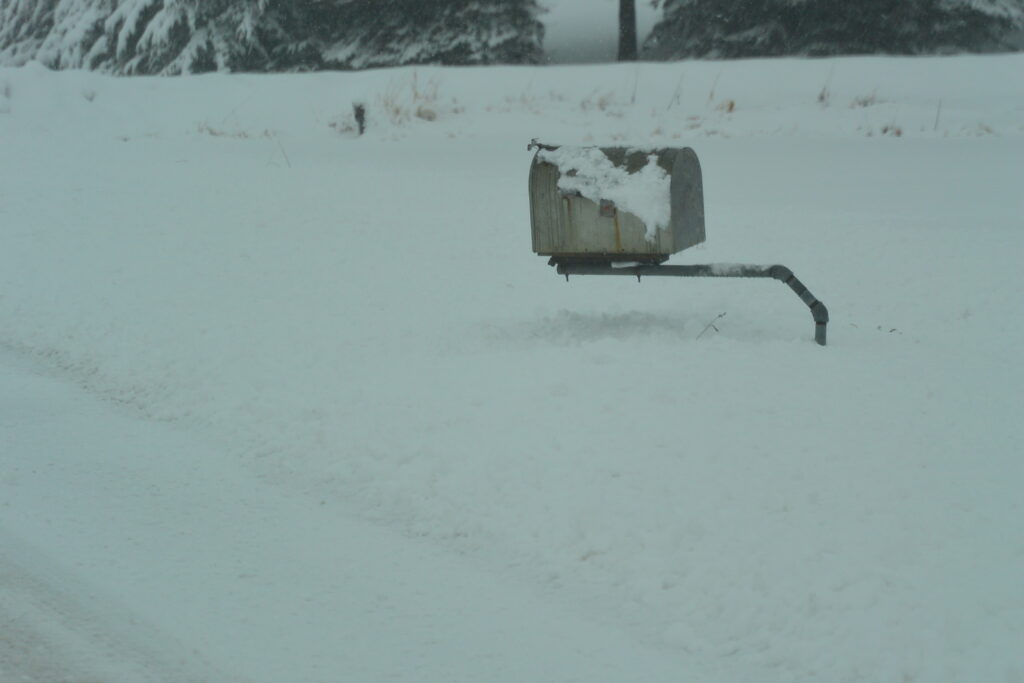 At Ottertail Lake, where the river meets the lake, I stopped and got out of my car. The wind was blowing a hooley, as they say in Cornwall, England. I tried to steady my shot to capture the trumpeter swans and snow geese, but it was hard, the snow was a-screaming and pelting my face. 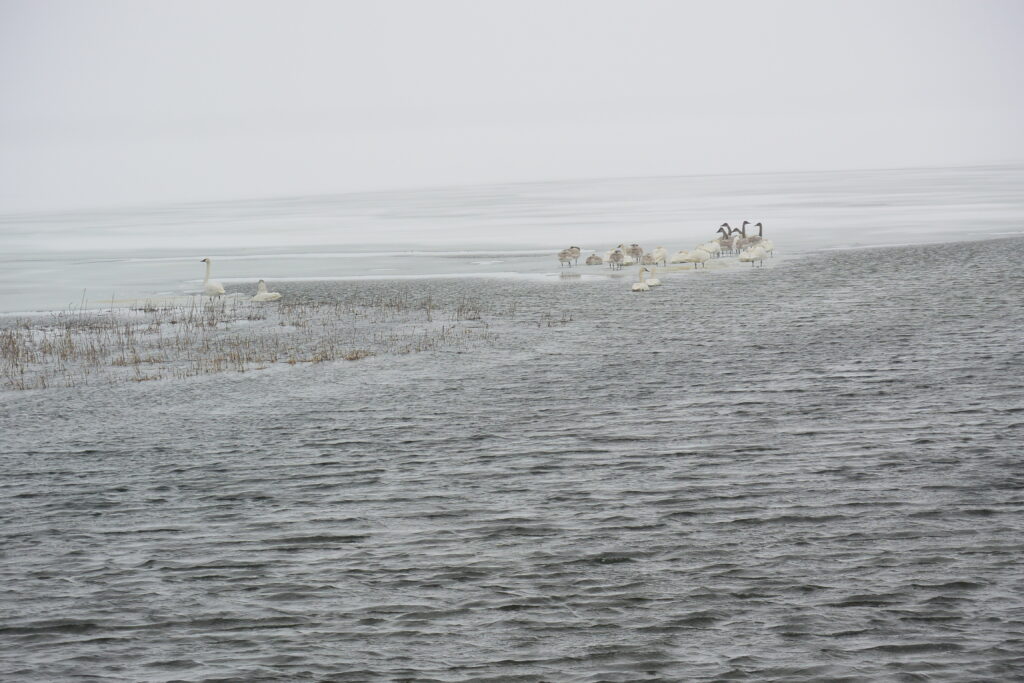 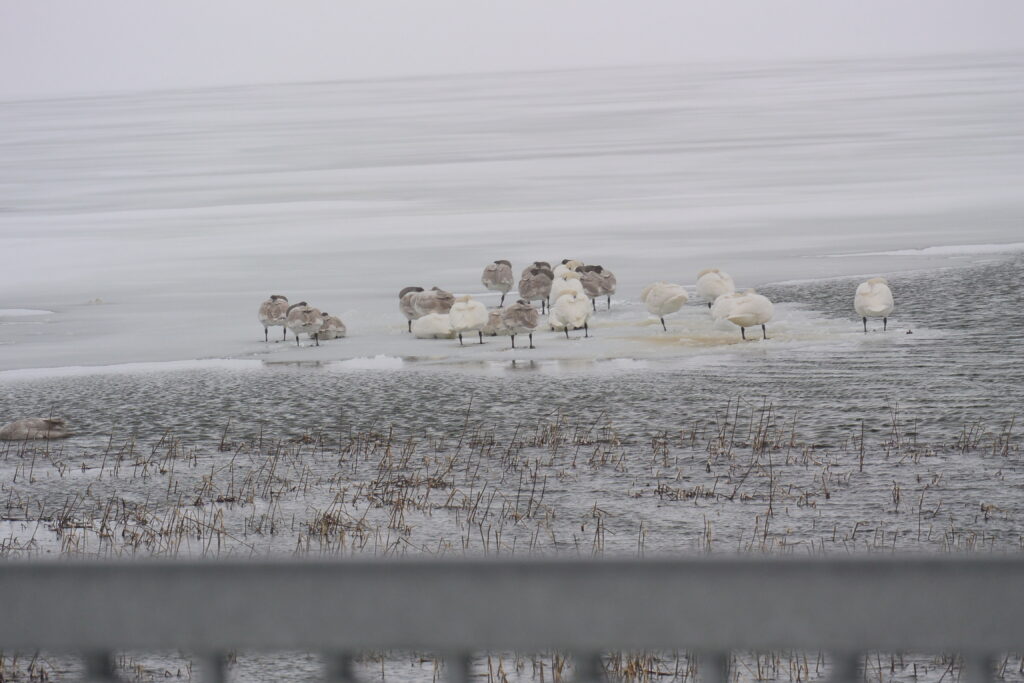 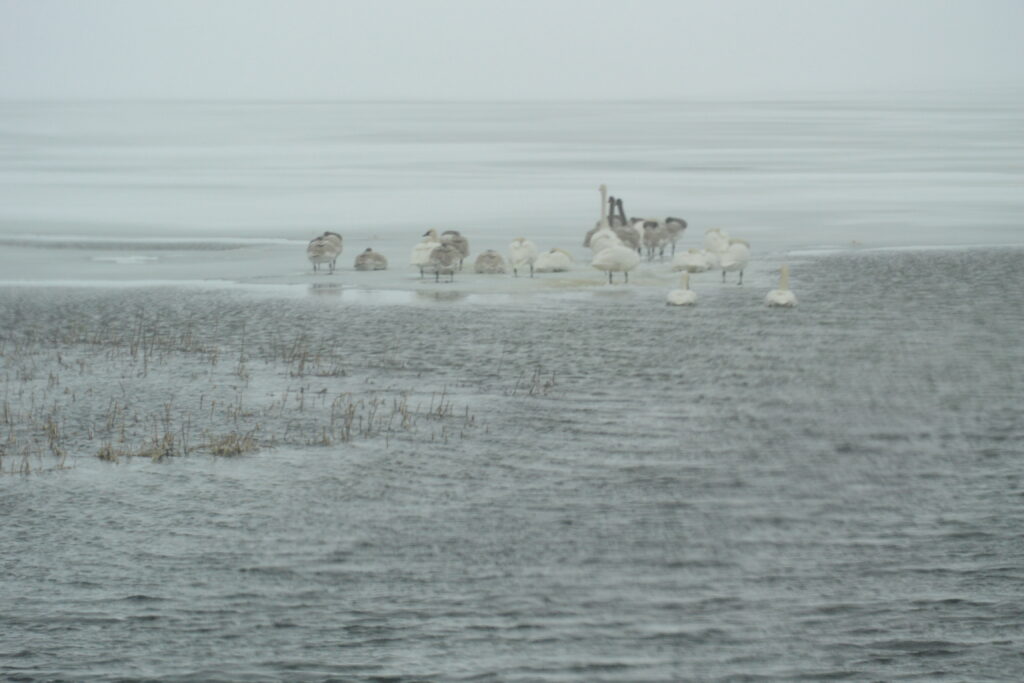 How do they stay warm? 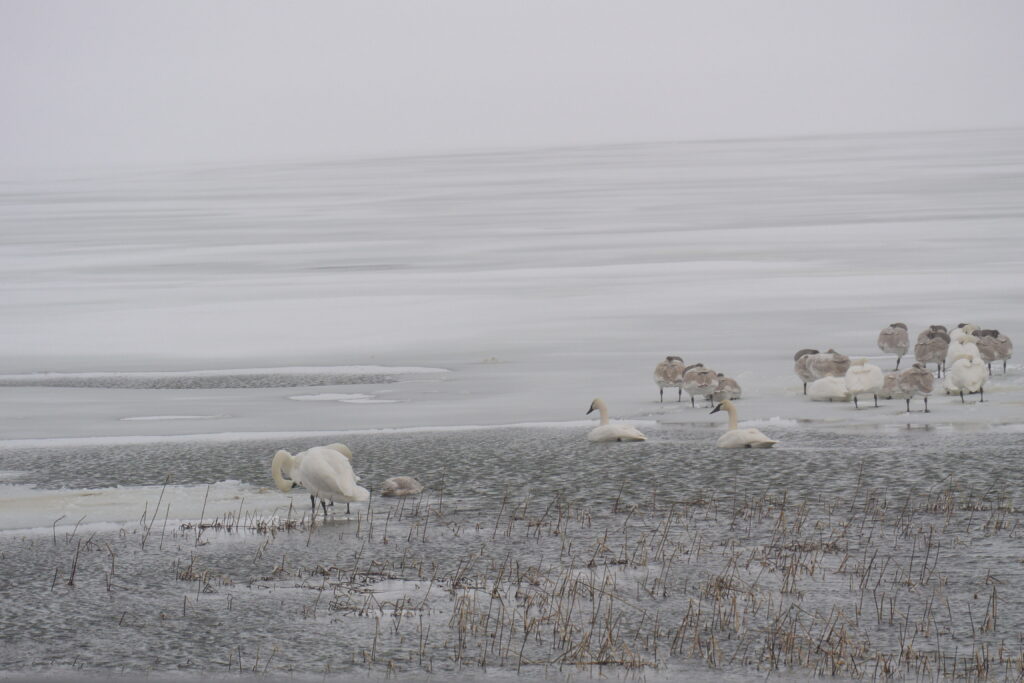 Wind? What wind? I heard them say. 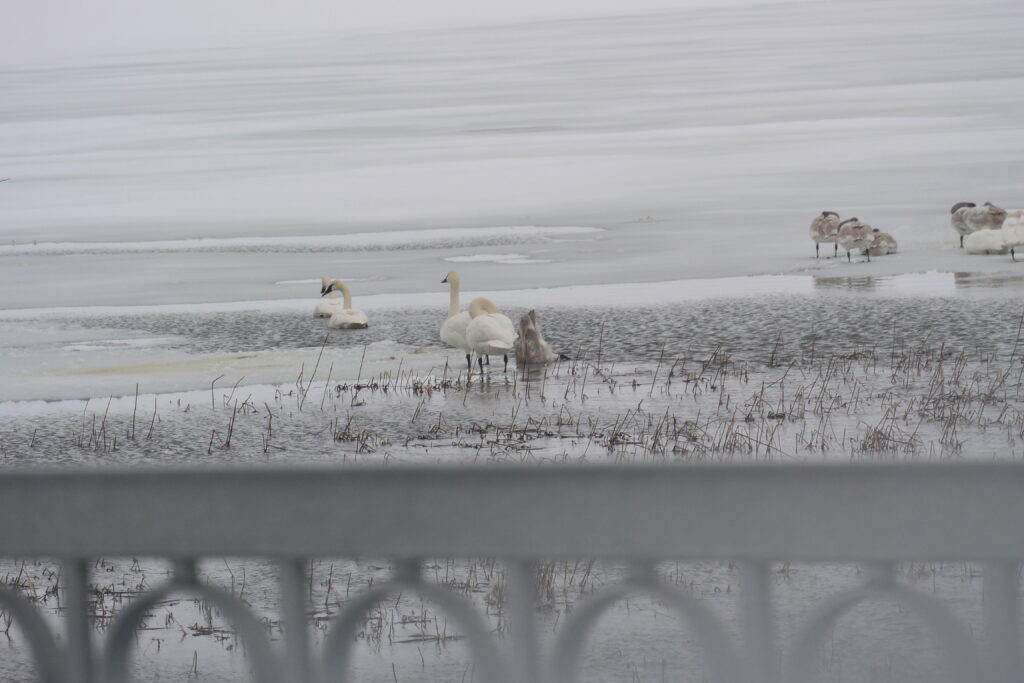 I finally reached my goal: The cabin. My practicing my photography had absorbed me for seventy-five miles. I’d missed the fact that we had received a lot of snow that day. 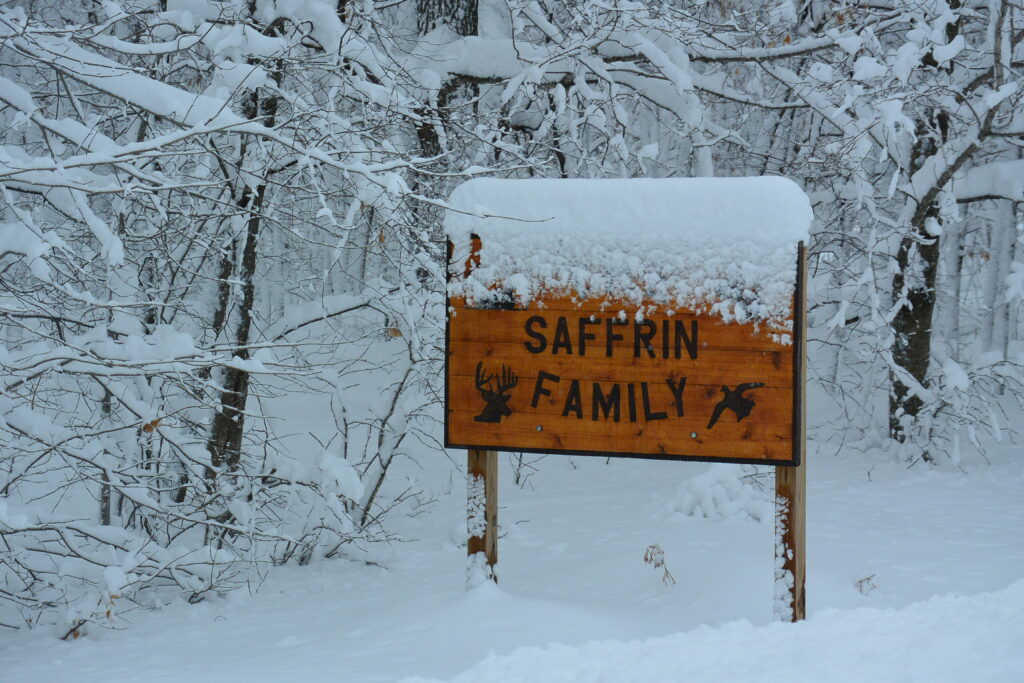 Somewhere in the neighborhood of fourteen inches worth. 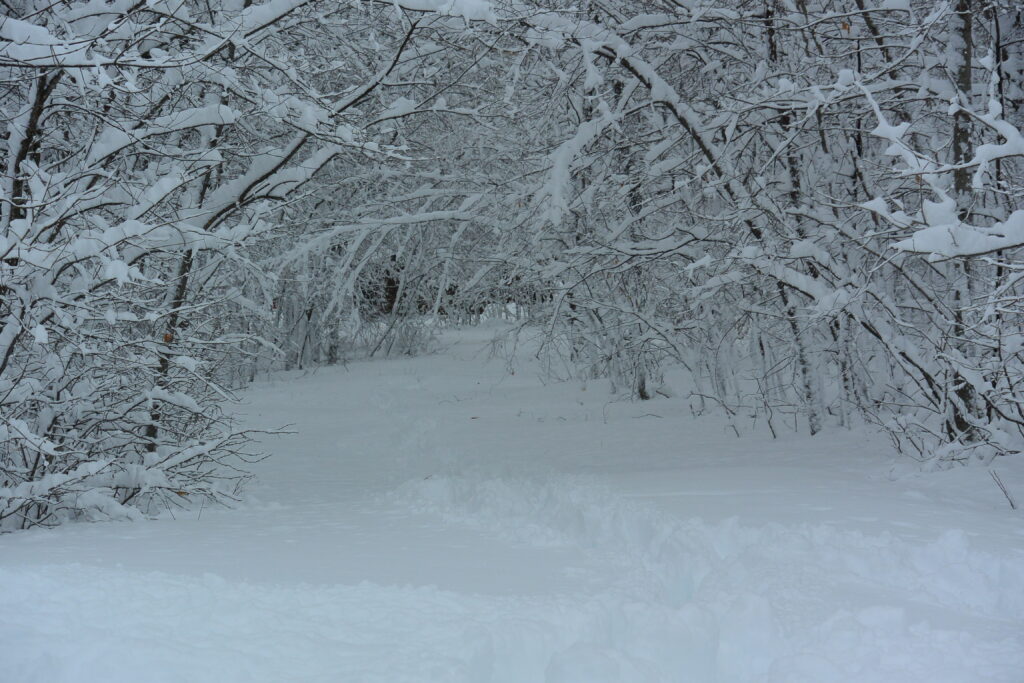 When I arrived, Rick already had the tractor out, attempting to clear our driveway. Took him the whole day. Part of the next day too.

Traveling to the cabin on December 29, 2019, pausing and practicing, gave me a refreshing year-end boost into 2020. And it made all the difference. To me.

Another was not so fortunate.

Once Rick had cleared the driveway on Tuesday, we went to Perham for groceries. We returned to the cabin. And found this: 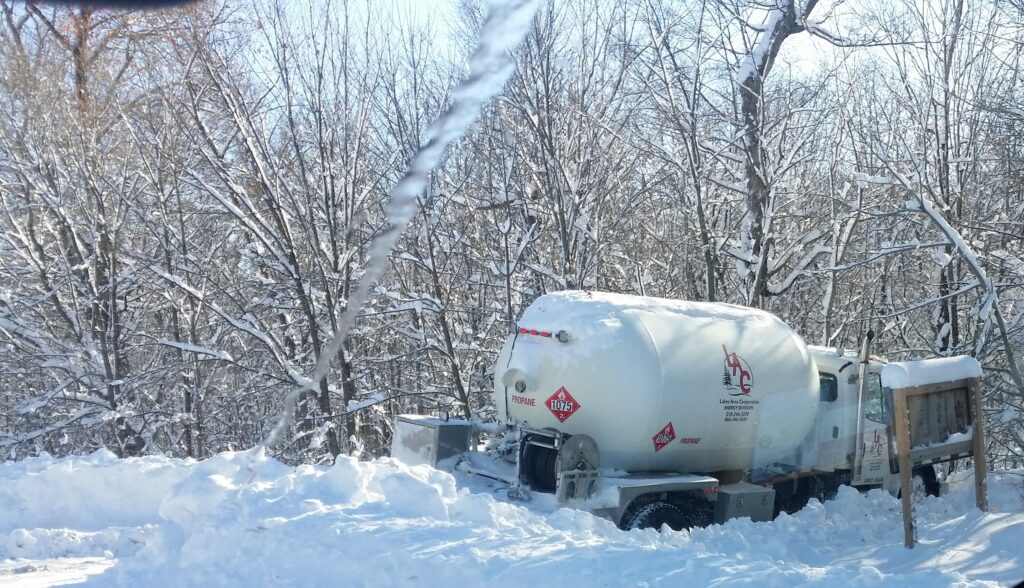 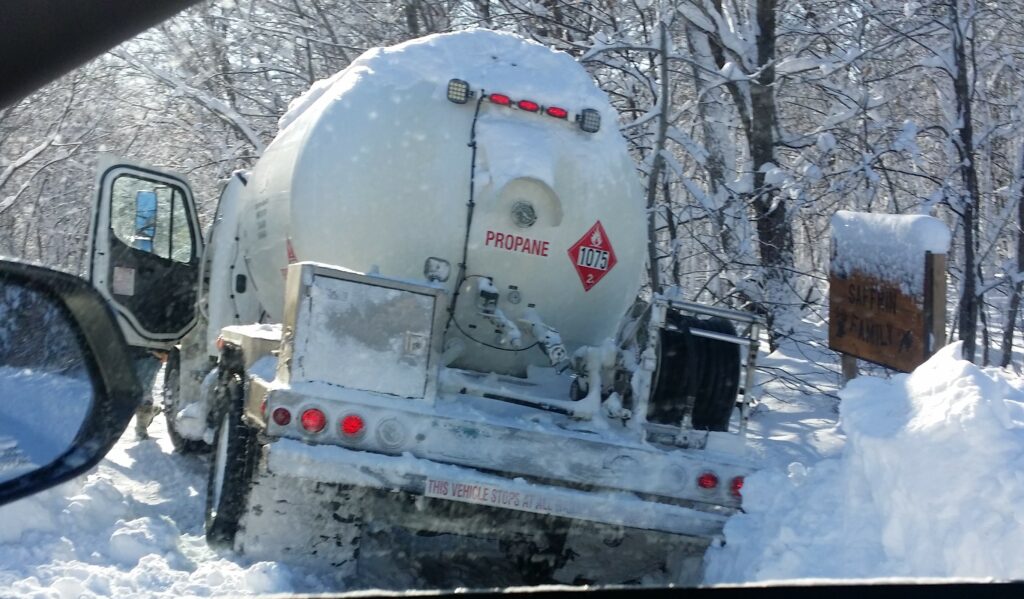 A propane truck had slipped off the plowed path down the driveway. After a lot of shoveling, pouring sand between the tires, Rick had an idea that involved our tractor and tow ropes. 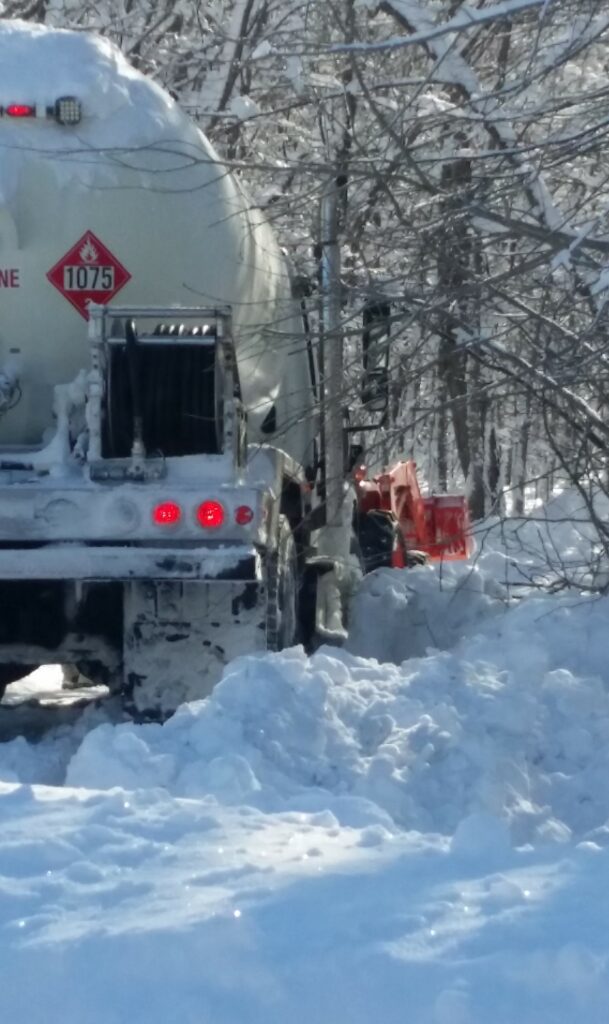 The little tractor that could 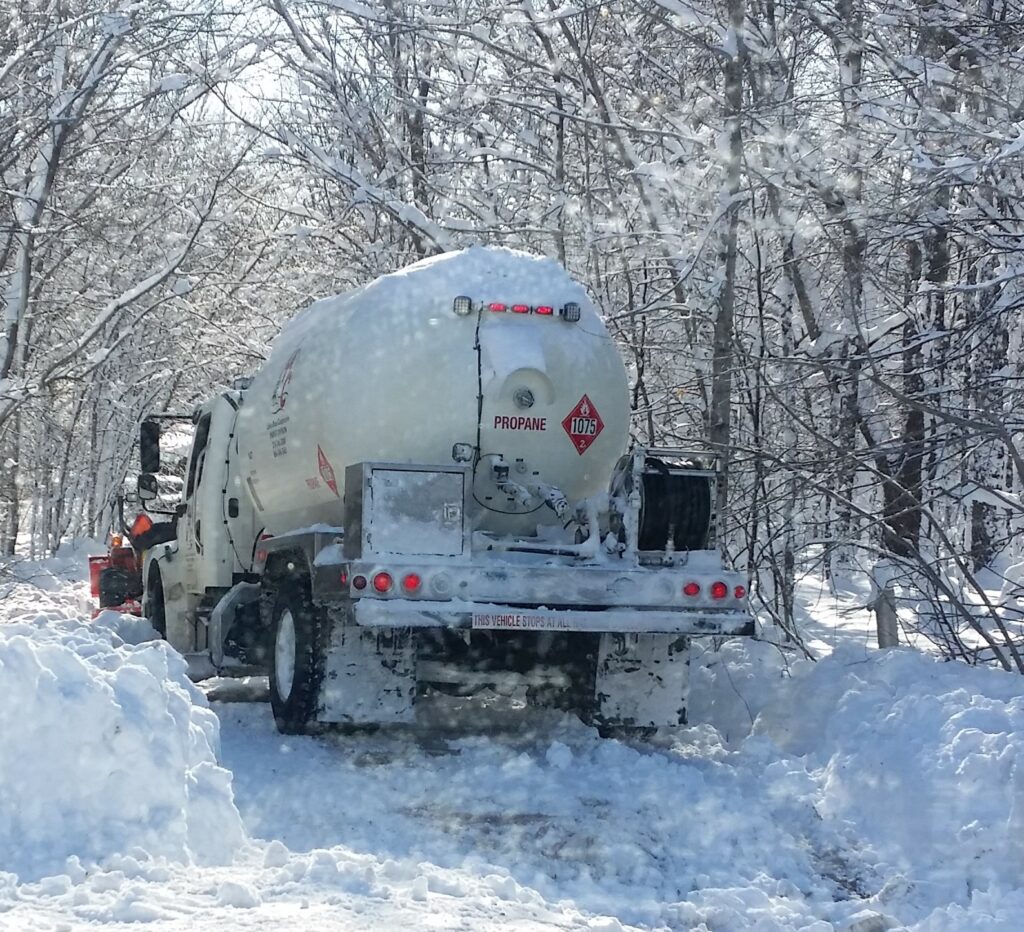 Tractors and their operators come in handy, some days. Especially when you’re in need of propane. 🙂