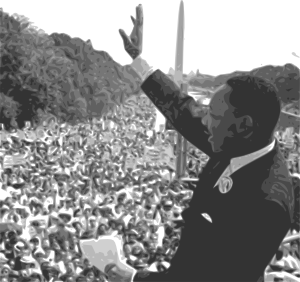 There comes a time when one must take a position that is neither safe, nor politic, nor popular,

but he must take it because conscience tells him it is right.

Rev. Dr. Martin Luther King, Jr. believed dreams could become real. He, like Anne Frank who coined a beautiful phrase, were the forerunners to not “wait[ing] a day longer to bring change to a world they wanted to see.”

I was 10 years old when Pastor King was assassinated. 1968 was the same year in which Robert Kennedy was assassinated. I did not understand these killings and do not remember being taught in elementary school in Bloomington, Minn., about racial tensions. I was raised in a home where all people were considered equal.

My friend, Joy DeKok has written a book about legacies and asks us to be mindful of this: What essence or memories of ourselves do we want to leave behind for future generations?

Every Martin Luther King, Jr. Day I think of a legacy my grandfather left. I never met the man. He died when my mother was 16. But the story, the legacy, I have of him is that he would not cut, as my mother told me, “A black man’s hair.”

Yesterday I was at my mom’s house. She has his barber memorabilia displayed in a glass cabinet in her bathroom: a shaving brush, hair-clipper, straight razor, scissors and combs. Next to the items displayed is a black-and-white photo of Alfred proudly standing behind his chair, dressed spit-spot in a white and pressed barber’s uniform. He was a barber on Water Street in Chippewa Falls, Wisconsin.

I’ve asked Mom several times why her father wouldn’t cut a black man’s hair. “I don’t know,” she said. “I never asked him.” We’d like to think he didn’t perform the task because he was untrained in how to cut, or that the shop owner would not let him or his co-workers do so, poor ridiculous guesses as they are. The reality, though, is that he never did.

It’s a legacy about my grandfather I have always hated. And it’s one that doesn’t make up for the kindness he gave to others. My grandfather had a brother, Herman, who ran away from home when he was a teenager. My grandparents, Alfred and Alma, married. They lived not too far from railroad tracks that ran through their town.

One evening, around suppertime, a bum, fresh off a train, came walking to their door. He was dressed in rags, bearded and scruffy-looking. My grandmother let him in and she, not thinking twice about giving a meal to a person in need, served him as she and Alfred ate too, and the man went on his way again. Later that night, Alfred suddenly said to my grandmother, “Alma, I think that man we just served dinner to was my brother, Herman!” He rushed out into the night to try to find him but never did.

Dreams. Legacies. What we leave behind. Sometimes our actions speak louder than our words.

This past week, Sue, a person at our church, Hope Presbyterian in Richfield, Minn., who keeps the minutes to the our session’s meetings, revisited the early minutes of our church when it was founded in the mid 1950s. She came across a line in the minutes that said our church would be a nonsegregated house of worship. All were welcome. And yesterday was proof that we have lived those words.

Yesterday was Racial Unity and Reconciliation Sunday and as I sat in the pew my heart warmed. The pastor from our Laos congregation, Pastor Terry Pathoumthong, gave a sermon, as did Pastor Jerry Daidii, from our Liberian congregation. It’s a dream, our senior pastor, David Lenz, said he has dreamt of “for many years.” Yesterday Pastor Lenz’s dream became real. On the sanctuary platform, Asia, Africa and North America were represented as One church body in Christ. 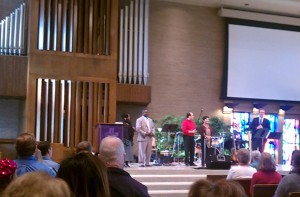 Prayer were uttered in the tongues in which these men were raised. Children from many races performed a beautiful song and Pastor Terry performed a song in the Laotian language with his band during the offertory.

The text for our service was from 2 Corinthians 5:17-20 about being ambassadors for Christ. When Pastor Terry read the text, he spoke in Laotian. I sat in back of his congregation as they listened intently to Scripture. He switched to English and told the story of coming to this country, on “February 11, 1987,” as he told us several times, after tremendous hardship to get here, not speaking a word of English. Yet yesterday, he gave a beautiful sermon in English. His sermon, on being an ambassador for Christ, awakened me to this reality: Ambassadorship does not cost the same as it did for Pastor Terry. For me, the phrase means spreading the Good News. For Pastor Terry, who was raised Buddhist, it meant being rejected from the Laotian society, from his family. There was a tremendous cost.

For Pastor Jerry, from Liberia, who heads up the Abundant Life church at Hope, he too, offered a new thought about ambassadorship. He told that civil war ravaged his nation for 15 years and that there is still a lot reconciliation to do. He reminded us that before ambassadorship can happen, a desire for change, for a shift, has to come. One that comes from the heart.

And that brings me back to Rev. Dr. Martin Luther King, Jr. Like our church, our senior pastor, David Lenz, and pastors Terry and Jerry, he had a dream. A dream that caused a shift, a change; it’s a ripple that’s grown larger and, if yesterday’s service is any indication, one that has grown worldwide.

What kind of change do you want to see in the world? What legacy are you leaving? Why will the world look different today because you are in in it? Share your stories in the comments section.

Buy a paperback version of BlessBack: Thank Those Who Shaped Your Life

Buy a Kindle version of BlessBack: Thank Those Who Shaped Your Life