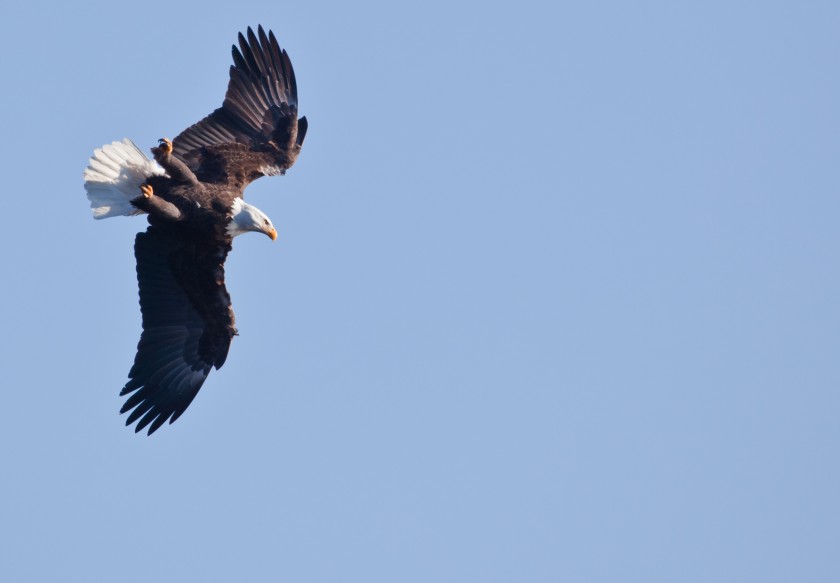 Summer 2013 at our lake home in Ottertail County brought us bald eagles. They seemed to like our wetlands and frequented the place. If you’d like to hear what they sound like, thanks to the National Geographic website, you can do so here.

At the Perham fair, a handler from The Raptor Center brought a rescued eagle for all to see. This one was blind in one eye and 30 years old. Still, it is a sight to behold. 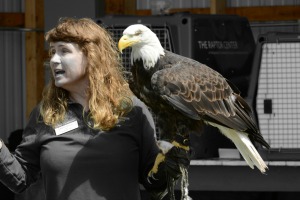 On one of our trips to the north bay, we spotted an eagle hovering over her nest holding a fish out to her babies. 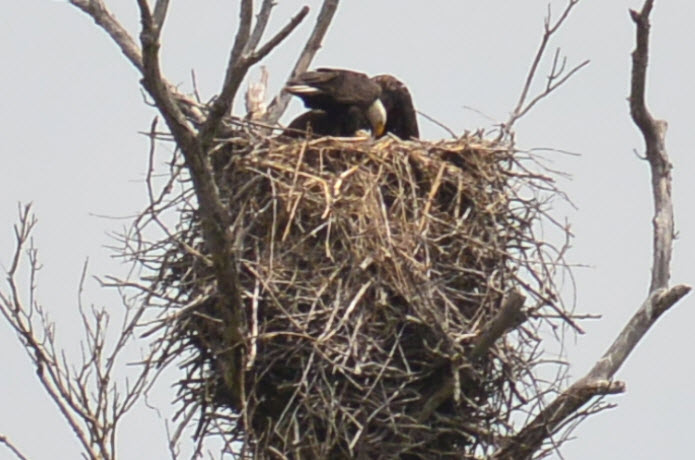 But the culminating event of eagle watching happened August 29 when my husband Rick and I were on our last pontoon ride of the summer. It is a dreaded time for me. I cry every time we put the pontoon away, knowing that for eight months my favorite thing to do will not be available until a season of ice on and ice out has passed. As we motored home that late afternoon on Dead Lake, Rick said, “There must be a bald eagle nest nearby. There are two flying above us.”

Before I had time to look up and find them, Rick said, “Did you see that! They just grabbed talons mid-air!”

Though I missed their cartwheeling move, they continued to put on a show with maneuvers that were nothing short of astonishing. They zoomed north, over Dead Lake’s wildlife production area, gaining speed as they went, flying in perfect synchronized side-by-side formation. Nature’s Top Gun performance.

All at once, one of them flipped upside down for a second, and flipped right side up again, performing a perfect loop-the-loop before aligning in perfect side-to-side formation with the other eagle.

The moves the eagle made, each happened in a second. The beautiful winged creatures put on a show for us, flipping over and over again as they flew. 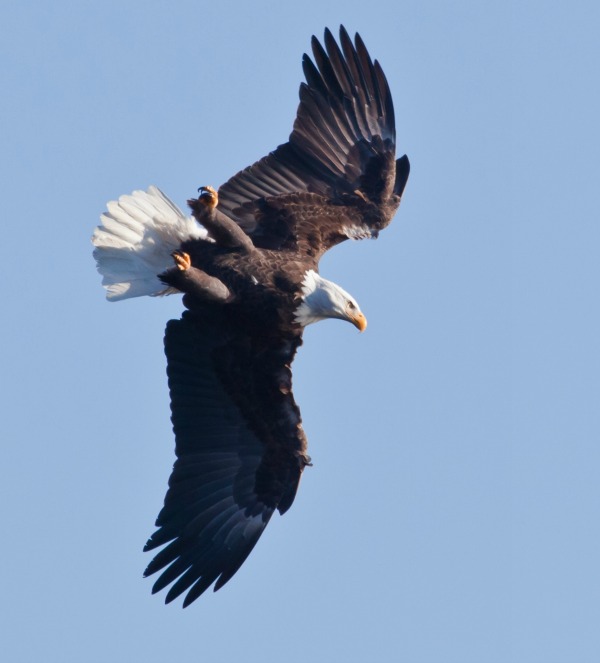 According to the American Eagle Foundation, the performance of these winged marvels had little to do with putting on a show and everything to do with the bald eagle’s courtship ritual. According to Pam Mullins, a photographer who has studied eagles for years and captured an example of an eagle performing a loop-the-loop here, eagles can reach 43 miles per hour when flying.

Away went my gloom. I was given winged-marvel treats that escape many a bird watcher. I will hold in my heart the image of the eagles’ sky tricks until pontoon season comes ’round again, where maybe their antics will by then have given me a couple of more eagles to watch all summer long.

Some fun facts from the American Bald Eagle Information website:

4 – weight in pounds that an eagle can lift.
Minnesota – one of three states with flourishing bald eagle populations (Florida and Wisconsin are the other two).
white – what “bald” once meant.
sea eagle with white head – The bald eagle’s scientific name is Haliaeetus leucocephalus – (halo=sea) and (aeetos-eagle) (leukos-white).
eyes – has 4 times the sharpness of a person with perfect vision.
twice – bald eagles’ feathers weigh twice as much as their skeletons (250 to 300 grams).
7,000 – average number of feathers a bald eagle has.
kettle of eagles – what several eagles that soar together in a thermal is called.
hollow – eagles’ bones.
keratin – of what an eagle’s beak, talons and feathers are made.
North America – only the bald eagle restricts itself here.
35 to 37 – length in inches of the average female eagle.
79 to 90 – wingspan in inches of an average female eagle.
30 to 34 – length in inches of the average male eagle.
72 to 85 – wingspan in inches of the average male eagle.
15 to 20 – average lifespan of an eagle.
106 – average body temperature of a bald eagle (41 degrees Celsius).
sweat – Eagles do not. They release heat by panting, perching or opening their wings.