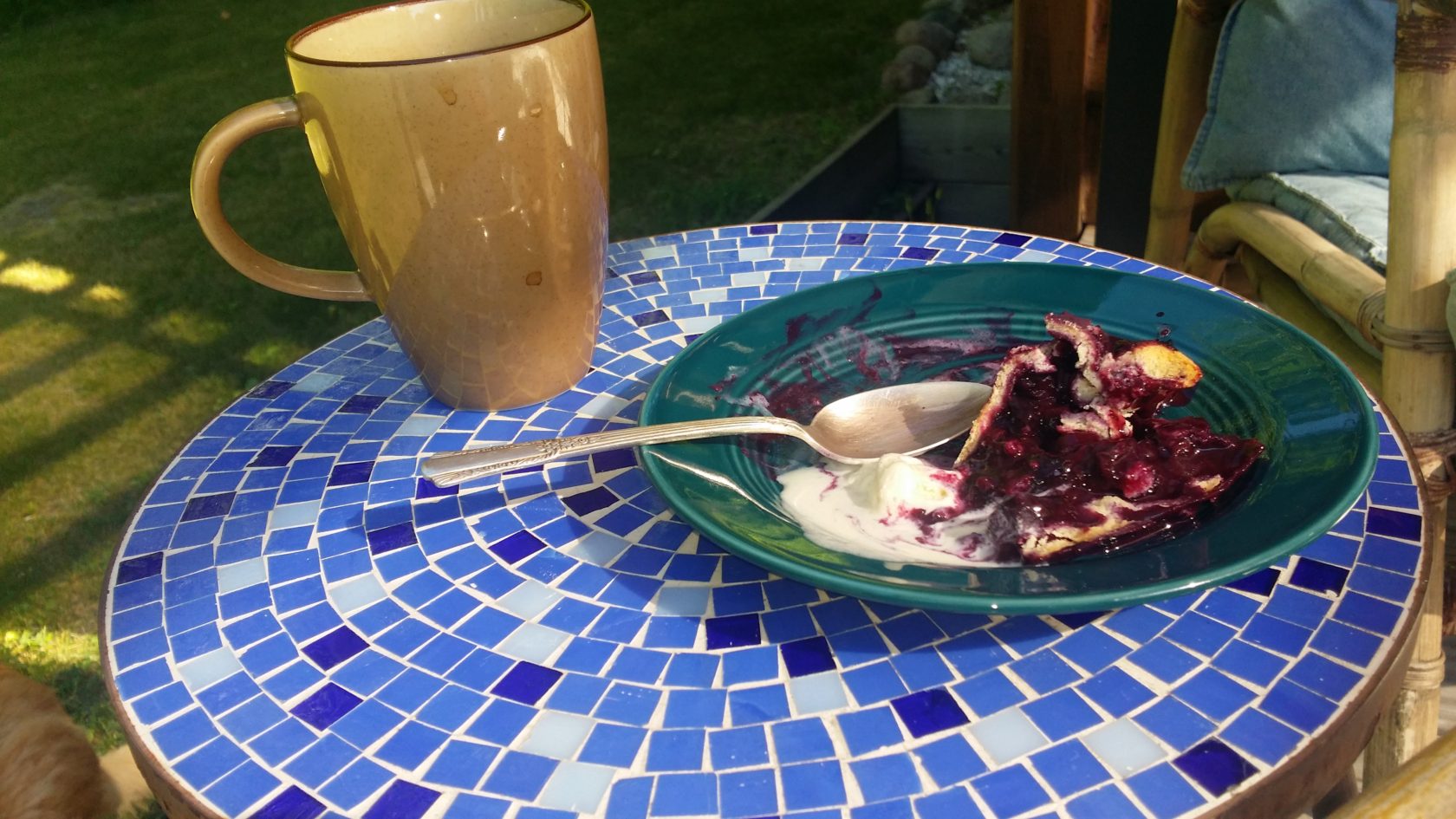 Today my father, Donald Trewartha, has been gone for 15 years. So this blog post will be a little bit nostalgic and blue. Blue because of Dad’s and my mutual love of our favorite fruit, blueberries, our favorite color, blue, and because of a little wonder that I was a witness to, both on the day my father died and today.

My dad was 73 when he passed away. While all who knew him were sad to see him go, all of us hated to see him suffering from Alzheimer’s and knew he was going to Heaven.

His last days were hard. He had declined food for awhile. His stunning blue eyes no longer opened. He wasn’t unconscious but in a peaceful state. Hospice had said he was near death.

Dad’s family gathered around his bed at Martin Luther Manor in Bloomington, Minn. His sweet sister, Carole, who had come down from Chetek, Wisc., blew us all away, and perfectly recited the twenty-third Psalm from memory.

The grandchildren also stood by his side. Ages 15 down to 5. We’d all been by his side. A couple of us had taken a break – me included – and had stepped out of the room. Mom stayed by his side. They’d just celebrated their 44th anniversary three days before.

Don and Carol Trewartha on their wedding day June 29, 1957

I was out in the lobby, when my niece, Katie, came running toward me. “The nurses say Grandpa is going!”

Quickly I ran into Dad’s room. Mom was the only other person in the room. Dad’s breathing was still low and slow. Mom held his hand. I went to the other side of the bed and held his other hand. Dad seemed fidgety. His legs and shoulders moved slightly. “It’s okay, Dad,” I said. “You can let go. We will miss you, but we will be okay.”

Suddenly, Dad’s beautiful blue eyes, which had been closed for so long, flew open. They were lit up with light. He looked 10 feet up above his bed. His mouth opened and his jaw dropped. He smiled and inhaled at the sight he beheld – which neither Mom or I could see.

We’ve talked many times about what we witnessed. Truly Mom and I saw him be accompanied into Heaven. I don’t know who hovered above his bedside, if it was Jesus, angels, his mother or his brothers and sister who had gone on before him, but whoever was there, visible to him only, Dad, with complete joy, and it felt like to us, complete restoration of mind, soul and body, let go of being human and followed those Heavenly beings upward.

Truly, that experience has stayed with me and Mom as one of the most significant moments of our lives. Beyond all doubt, we were witness to Dad’s seeing Glory.

So today, I was feeling nostalgic and just had the hankering to make a blueberry pie. I used the recipe from June 1997 Martha Stewart’s Living magazine.

You can find the recipe here. I love this version of blueberry pie because of its low sugar content. 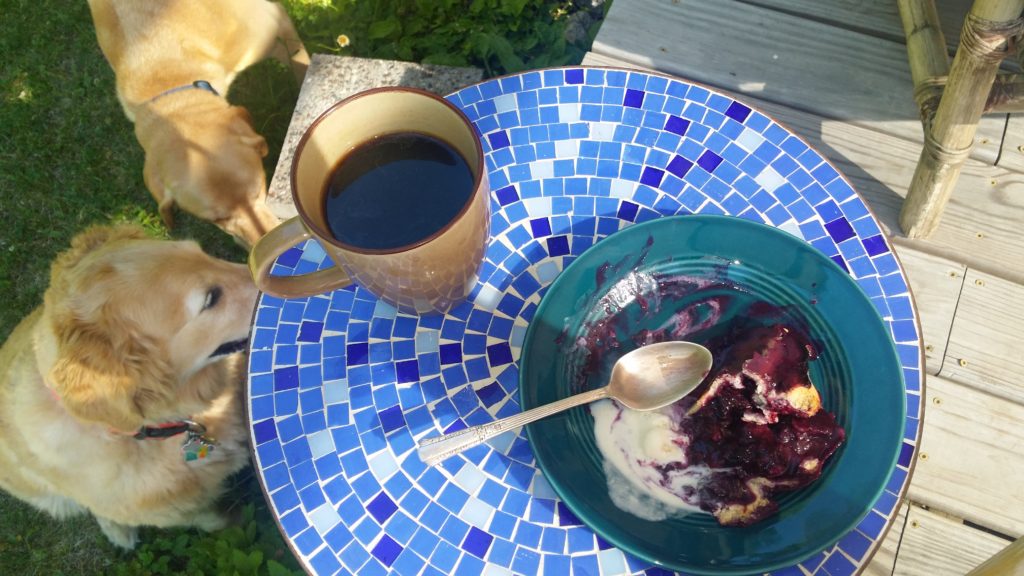 I followed Martha’s recipe except that I did not use her pie crust recipe. I prefer my tried-and-true version. I also did not chill the pie for 30 minutes in the refrigerator. I was short on time. And honestly, I don’t think it makes a difference. The pie was delicious, with just the right burst of blueberry in every bite.

Items you’ll need:
a pie plate (I used a glass pie plate and did not alter the temperature or baking time for baking this pie.)
3 pints of blueberries
1/2 cup sugar
1/4 cup flour (I think this makes the berries set up perfectly in the pie. I used King Arthur’s unbleached all-purpose flour)
2 tablespoons freshly squeezed lemon juice (I think fresh makes a difference)
1/4 teaspoon ground cinnamon
an egg and a tablespoon of milk (to seal the pie crusts together and to brush on top of the pie before baking)

Bake at 425 for 20 minutes then turn the oven down to 350 and bake for another 30 minutes. Martha suggests 30 to 40 minutes. My pie was exactly how I wanted it to look and set up at 30 minutes. I cooled the pie first on a rack and then refrigerated it until served. I splurged and served it with Alden’s organic vanilla bean ice cream – outrageously delicious with the pie.

For additional directions, please see Martha Stewart’s recipe provided in the link above.

In food processor bowl, combine flour, salt, and butter. Cover and whirl until the ingredients resemble coarse crumbs. While the processor whirls, toss the cold water in all at once and continue to process until the mixture forms a ball. Makes 1 crust or the top of one pie.

This recipe combines well – I can make 3 crusts at once in food processor.

Put crust on flour-dusted board. Roll crust out and then place in pie tin. Add your favorite pie ingredients.

Lastly, as I made the pie yesterday, Rick said, “Julie, come quick. There are bluebirds here.” Bluebirds are my favorite bird. This year I bought some special suet in hopes that bluebirds would come. And they did. Two of them and they put on quite a show 10 feet from my window.

I’ll let the pictures speak for themselves.

It was a lovely day – surrounded by memories of my Dad – and everything blue.

One last thing. My website’s store is running a free shipping promotion as well as a couple of sales now through July 5th. Hope you can find something to suit yourself!