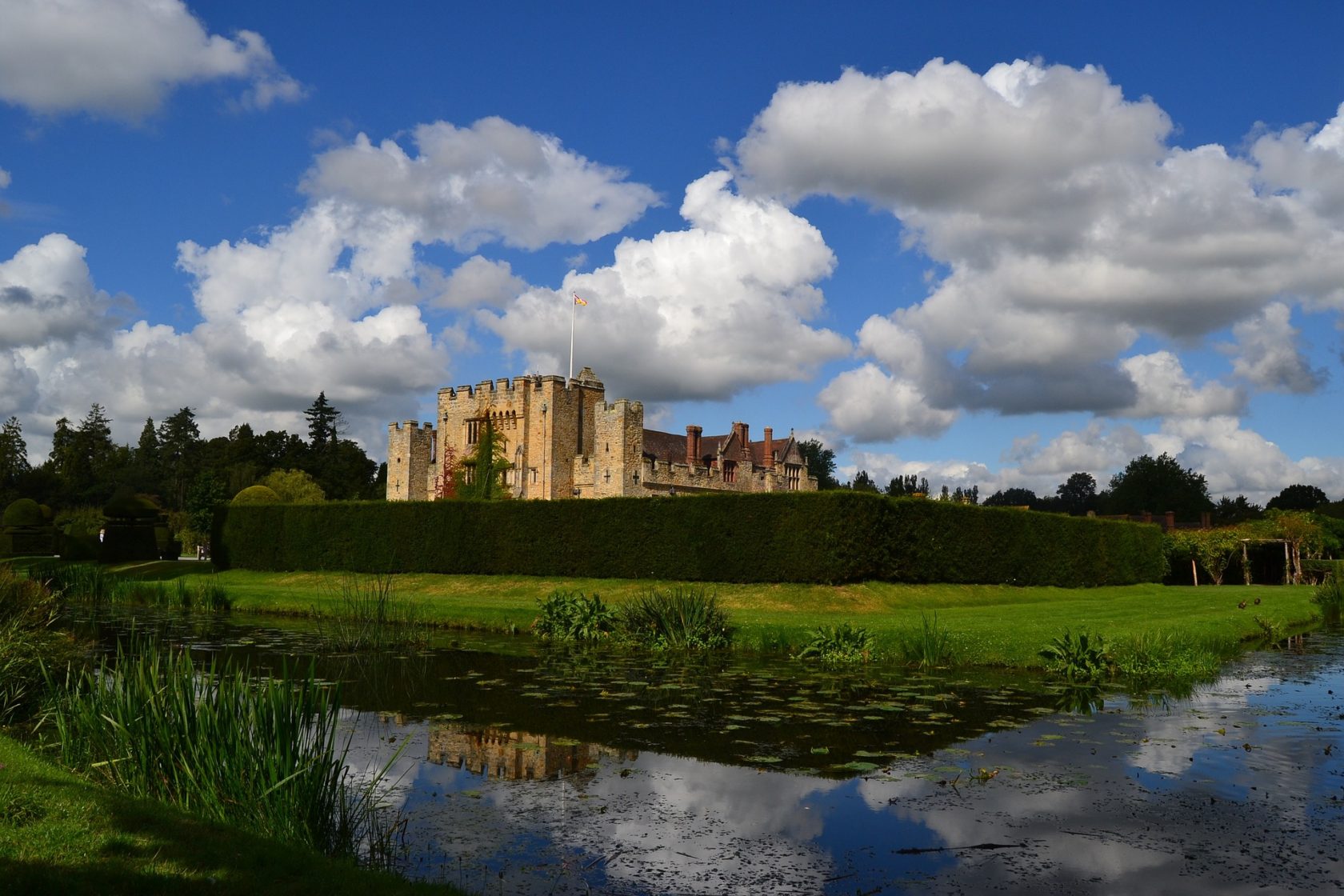 In the course of doing research on British novelist Sue Russell, I learned of her having played the piano for a ballet school, scrubbed steps in hospitals, volunteered as a Samaritan for 17 years, and taught English in Indonesia. But what fascinated me most, from a writer’s viewpoint, was discovering Sue knew she wanted to be a writer when she was a young girl. I couldn’t help but smile when I read that by 12 she had a handful of rejection slips.

Ahh, to quote another British writer, Jane Austen, the half agonies and half hopes of a writer.

Decades later, Sue’s friends put up a challenge. Stop swimming in the shallow end of the pool. Write that first novel before you turn 50.

Yay —  or well done, Sue’s friends! Share your heart, be listened to, and be pushed into making those hearts’ desires come into fruition? Wow, how true-friendish can a writer get?

Sue met their challenge. She had her first novel published in 2010. Since then, Sue’s stayed in the deep end of the pool and gone on to write four additional novels.

I first wrote a blog post about Sue back in 2012 when she asked me to review The Land of Nimrod, the third book in a series.

In the spring of 2016, Sue asked me to review An Iron Yoke, which you can read about on Amazon.com here and Amazon.uk here. Suffice to say, I thoroughly enjoyed the book. I love the characters, loved Sue’s digging into what motivates us to act in the ways we do. I also love that wry British humor, which Sue perfects in this book. I think she might get that talent from her father. Here’s a little proof. It’s an image from Sue’s personal facebook page (Sorry, Sue, for not asking permission first!), one of those priceless images that succinctly tells of a person’s character. 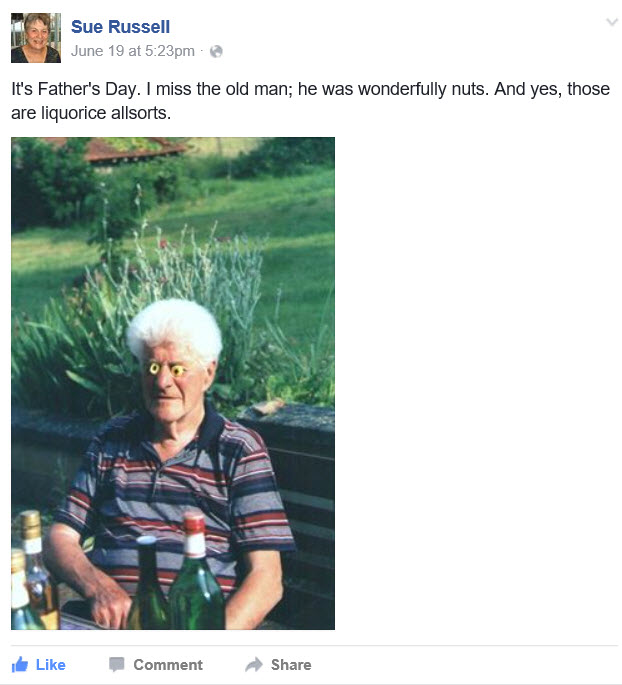 Sue has that kind of wit in her stories. She and I became facebook friends about five years ago, though I’m not sure if I reached out to friend her or she did to me. Whatever the case, she and I have, several times a year, written back and forth. She wrote a lovely review of BlessBack®, which I’m grateful to her for doing.

I knew she resided in Kent County, England, with her husband, and dog, Rosie (unless they are at their 350-year old home in France – more on that in a bit). But I wanted to learn a little more about her. So, what follows is a Q&A between Sue and me. I’ve not changed the spellings of our correspondence because I want to preserve the original text and, seeing British words on a page makes me feel happy and one step closer to England… 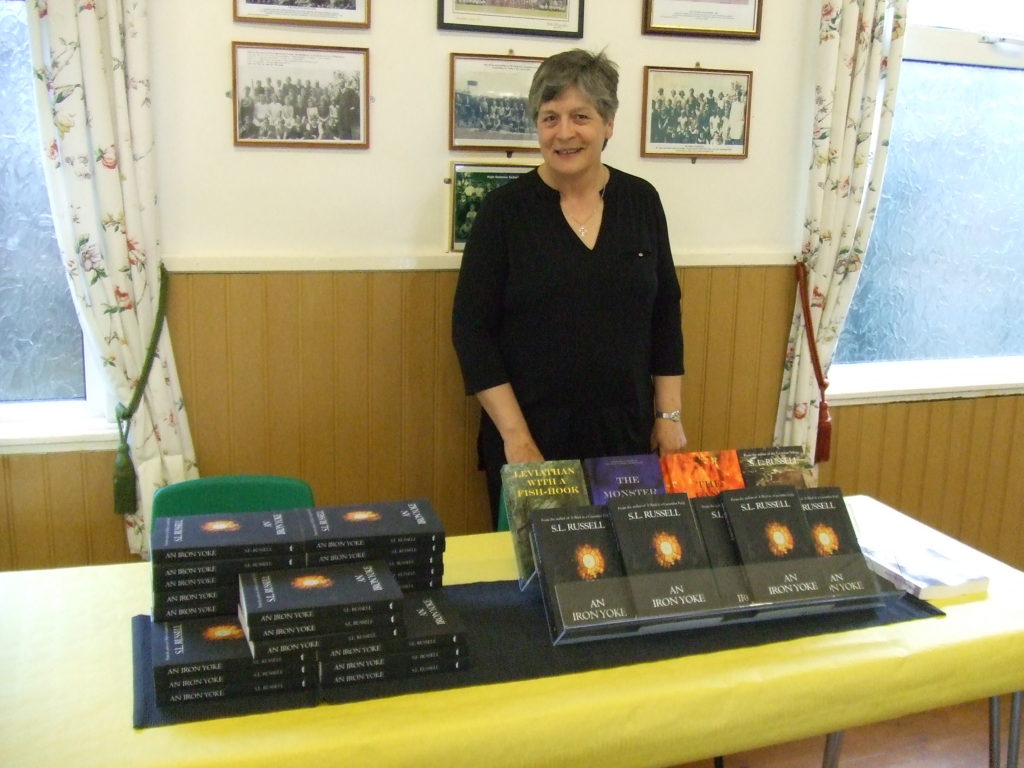 Sue at the book launch of An Iron Yoke

Here are some “soundbites” from our interview, both about her newest release, An Iron Yoke, her writing life, and other interests:

Julie: Hi Sue, thanks so much for being a part of today’s blog and sharing a little about your life. First of all, I loved An Iron Yoke. I love the complexities of the characters, the setting, the peeks inside the lives and lifestyles of what some of us can only dream about, and your wonderful humor sprinkled throughout the novel. I loved the characters but most especially Helena, Erica, and of course, Joseph, who was the pastor in the village of Compton. I also adore the repartee between two men, one of whom says, “You’re the worst of the bunch. And with a chip on your shoulder that gives you a permanent lurch.”

How do your characters come to you?

Sue: Hi Julie. Thanks for inviting me to be a part of today’s blog. I don’t know where the characters come from; a life of looking, listening, cogitating, reading, talking, I suppose. And just having that cast of mind that stores away impressions, faces, ways of speaking. Their occupations fit naturally into the plot and their characteristics.

I love Joseph too. I try to portray my clergymen as well-rounded human beings, flawed but with their own strengths, in part to counter the usual images in the cynical media, where they often appear as weak-chinned buffoons or corrupt manipulators. The ones I know are good people, hard-working, trying to love their flock, patient in a difficult job, endeavouring to be more like Christ.

Julie: How do your stories develop?

Sue: The story itself starts with a germ of an idea and builds by layers, sometimes being added to, sometimes discarding bits. The plot can alter even if I have already started to write, as new ideas arrive or old ones seem not to work.

Julie: Where do you write?
Sue: I write in my study at home most of the time, books and pens and notebooks and laptop and all such things to hand, music if I need it as well. The process seems to change with each book, and oddly it seems harder to begin the more experience I gain. I’m poised on the brink of starting the next one, as it happens. I think I need something to push me over the edge! I do outline the plot, but there’s a lot of leeway for adjustment. 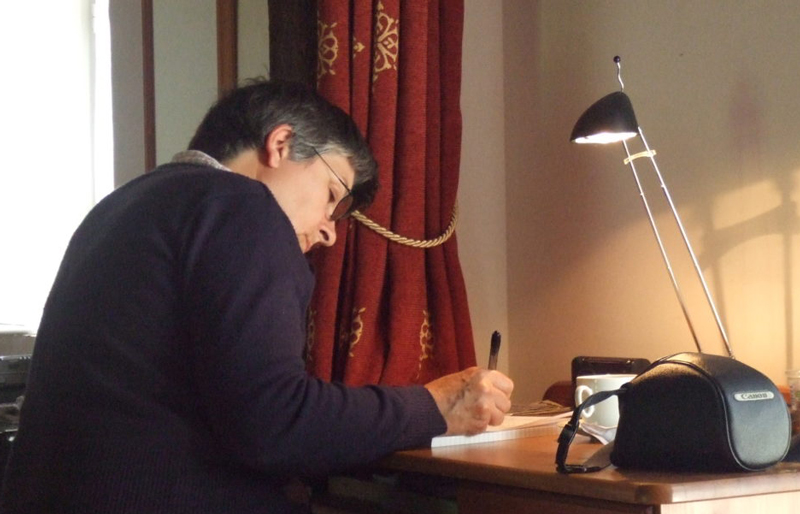 Sue at work on her novel at her desk in Rochester, UK

Julie: Is Compton, the town in An Iron Yoke, a real place?

Sue: Compton is made up, as are all my locations (apart from the obvious ones like London or Edinburgh!)

Julie: And, have you been to Scotland? Your scenes placed there are so vivid. I could easily envision everything from your descriptions.

Sue:  Yes, I have been to Scotland, on more than one occasion, many years ago. It’s a beautiful place when the weather is good. I chose it for the location of the siblings’ childhood because there are still many wild and remote places there.

Julie: Tell me about the title, An Iron Yoke.

Sue: In the Bible in the book of Jeremiah, chapter 28, there’s a stand-off between Jeremiah and Hananiah. Jeremiah is wearing a wooden yoke of his own making, symbolising the subjugation of Judah by Nebuchadnezzar. In verse 10 Hananiah breaks the yoke, but at God’s instigation Jeremiah prophesies that it will be replaced by an iron yoke. There is no direct parallel with my story except for the idea of an iron yoke being a heavy burden, like Ewan’s long-held guilt. And it gives Joseph the opportunity to remind Ewan about the verse in Matthew 11 where Jesus talks about his yoke being easy and his burden light in verse 30. Perhaps Jesus was quoting from Jeremiah – no doubt many of his hearers would have recognised the reference.

Sue: I’m not sure what other things you would like to know, but I do music, of course – I play organ in both English and French churches, flute in a band, and sing in a big choir (Rochester Choral Society.) I also have a handful of piano pupils, ranging in age from 7 to 87!

Julie: I see that you reside in Kent, England. Is Kent a county there? Isn’t that where Anne Boleyn, wife of Henry VIII lived?

Sue: Kent is indeed a county. The nearest city to me, about 7 miles away, is Rochester, a very old place with a Norman castle and cathedral and close connections with Charles Dickens. 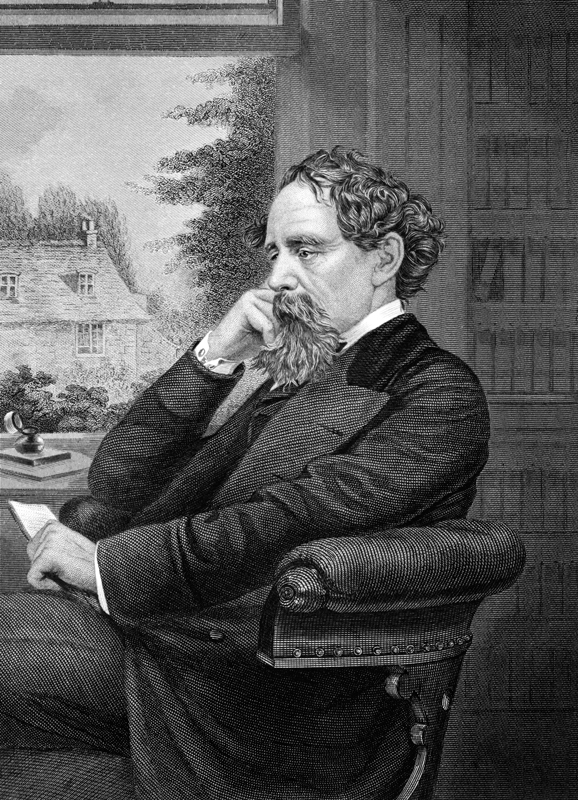 Several of his books are based there, and in his unfinished book ‘The Mystery of Edwin Drood’ his city Cloisterham is in fact Rochester. 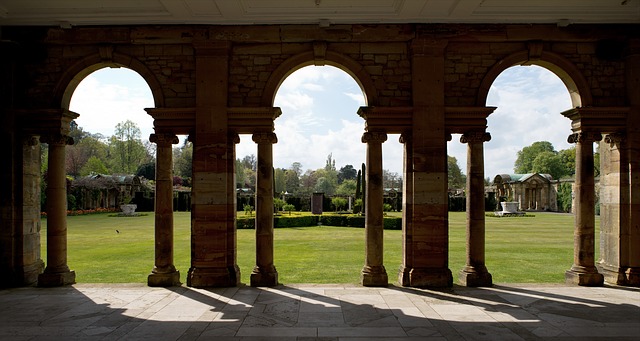 Rochester is about 30 miles south east of London. And Anne Boleyn did live in Kent, at a very beautiful castle called Hever, which can be visited. I play in a band and once in a while in the summer the band has played for the visiting crowds at Hever. 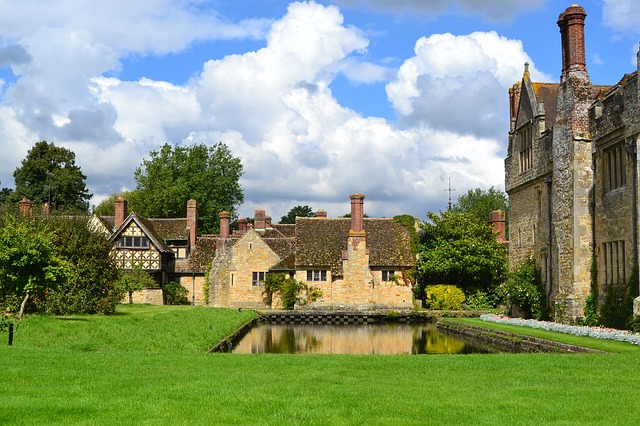 My husband and I have a house in France. Our house there is very old, at least 350 years, and once formed part of a farm. We have falling-apart outhouses, one of which would have been a breadoven. The orchard, which still has some cider apple trees, is now our garden. The trees are old and some have died or been blown down. Others still produce cider apples, and our neighbour collects them and sends them somewhere for cider to be made. 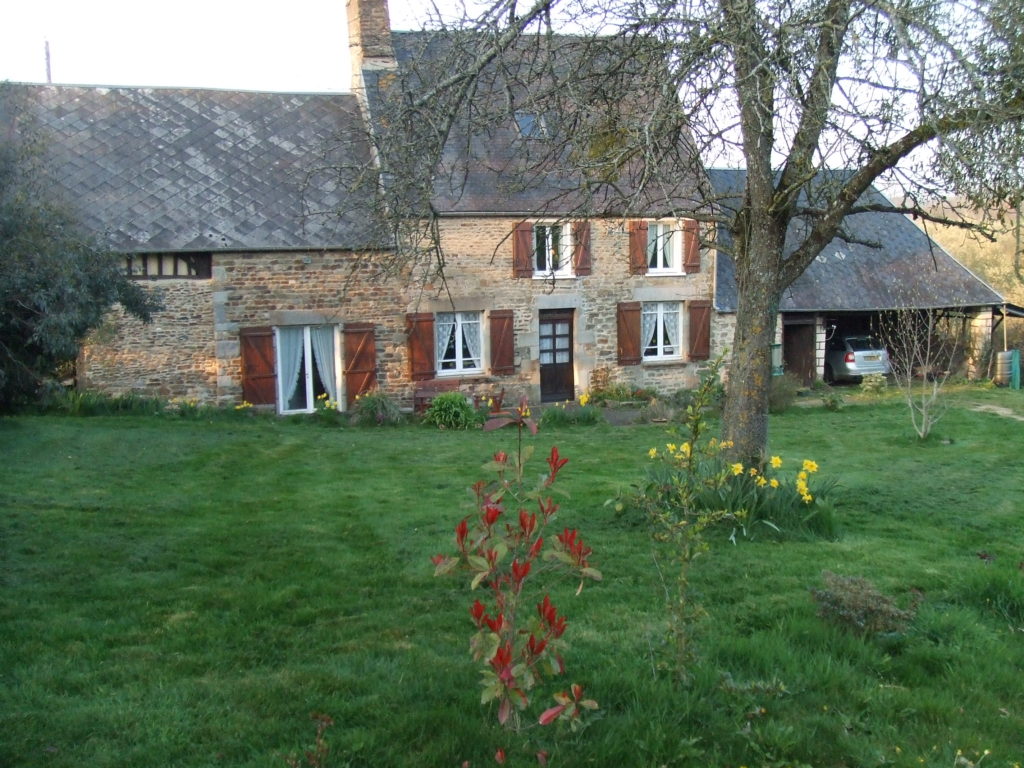 We really don’t get to sit much in our French garden – it’s mostly work!! With over an acre of cider orchard and that we are not there all the time – it’s a huge amount to do when we arrive – grass, trees, hedges, weeds, etc. Having said that, when it is done it does look very beautiful. 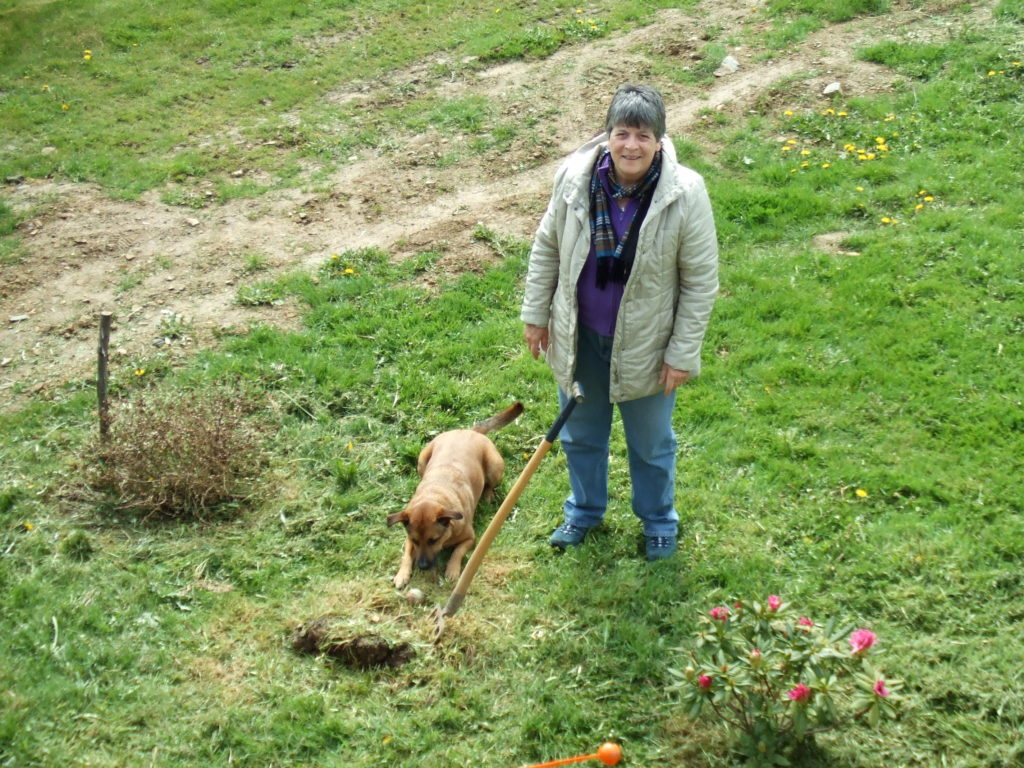 This photo of me shows our dog Rosie who likes to drop her ball just where we are working!  Rosie is a mixture of breeds: her mother was a German Shepherd, and she clearly has some Staffie in her genes. As to the rest, we don’t know.

Julie: You are right. The French home sounds like a lot of work, but fascinating as well, by being a producing orchard. Given that you live there part-time, you must speak French?
Sue: Yes, I do speak French – enough to get by or chat about ordinary things. 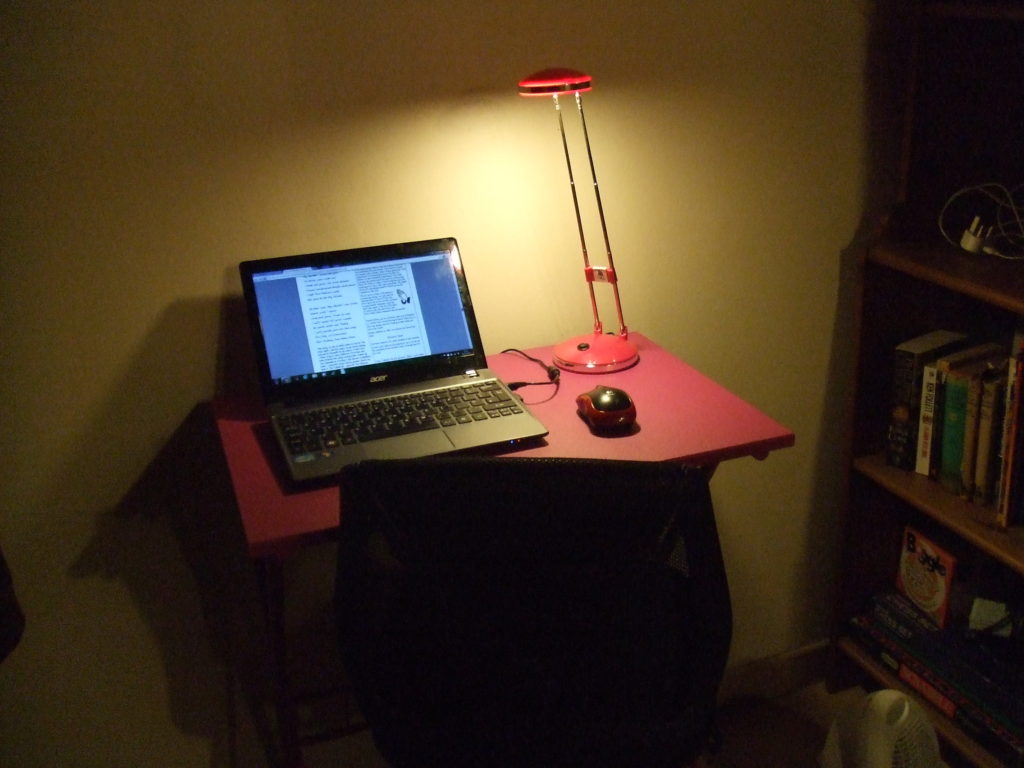 Sue Russell’s spot to write in at her French home

Julie: Are you working on anything new yet, writing-wise?

Sue: I have begun work on no. 6. Of course the mental work and research began months ago but just recently I actually typed some words! It’s in a similar genre but with some very different features.

Julie: Well, I for one, look forward to reading that book as well. Sue, thanks so much, for graciously allowing readers a view into your life.

Readers: Thanks so much for reading my blog about Sue Russell. As a way to say thanks to you, I’m offering up a free Kindle version of Sue’s newest book, An Iron Yoke, to one lucky person who leaves a comment on this particular blog and tells where and why he or she would love to visit in England, if given the opportunity. The contest ends Thursday, July 16th, 2016 at 11:59 p.m. I will let the lucky winner know by the end of the day on Friday, July 18th. I look forward to reading your comments and I’ll let Sue decide as to the winner! Once you have finished reading it, I challenge you to leave a review on Amazon, giving your thoughts on An Iron Yoke.
Julie