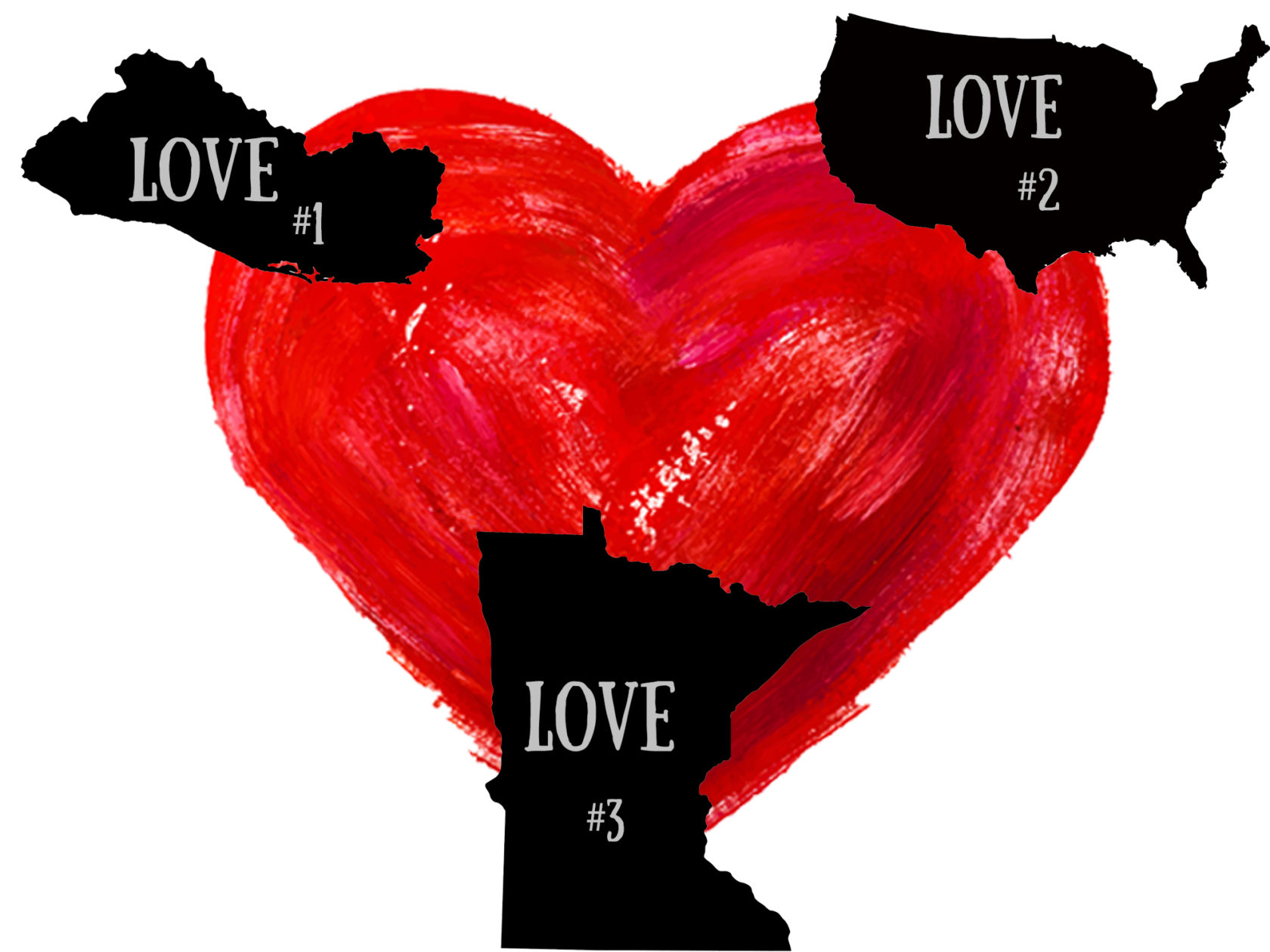 ST PAUL, Minn. — As I made my way from St. Paul River Centre’s underground parking ramp to its second level ballroom on Wednesday, September 6, 2017, people born in other nations passed by me, but we were all going to the same place, to their Naturalization Ceremony. Their expressions and attire gave away that this day, Citizenship Day for them, was a Big Deal Day. A mixture of anxiousness and excitement filled their faces. Anxious to be on time. Excitement as to what they had worked hard for to get to this day. Their figures were attired in suits and ties, dresses, and beautiful traditional outfits from their countries of origin. 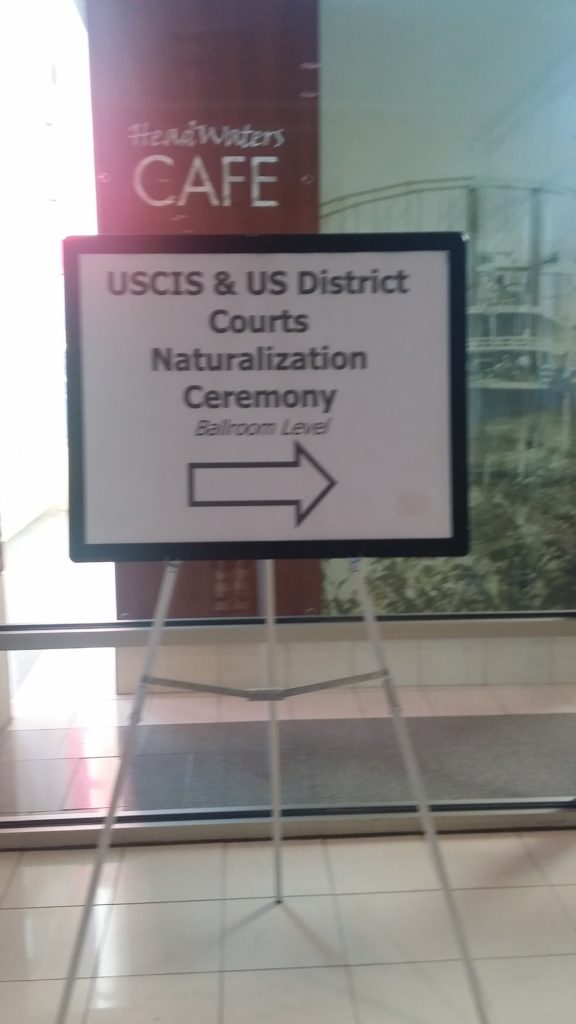 Our ride up the escalator conveniently acted as a metaphor. For those ascending it, they were citizens of one country going up, about to return here several hours later, as citizens of a new one, the United States of America, going down.

(Forgive the quality of these pictures. It was an emotional day for me too.)

Upon our arrival, lines formed in both directions up and down the corridor. They were organized by rows so when they were seated, their green cards and oath letters could be collected and then at the end of the swearing in ceremony, could be given their citizenship papers. 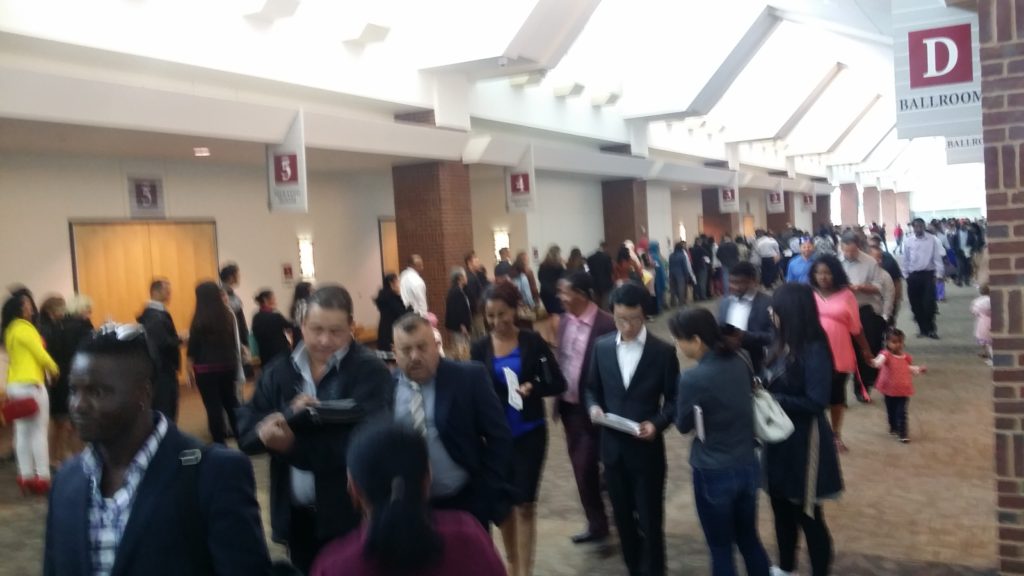 I looked for my son, Joe, to sit with him while we waited to watch his girlfriend, Valeria, and her brother, Rodrigo, both from El Salvador, to become U. S. citizens. Val’s three bosses also came to the ceremony. We caught up with two of them, Jeff and Dan, John having left earlier for a meeting. 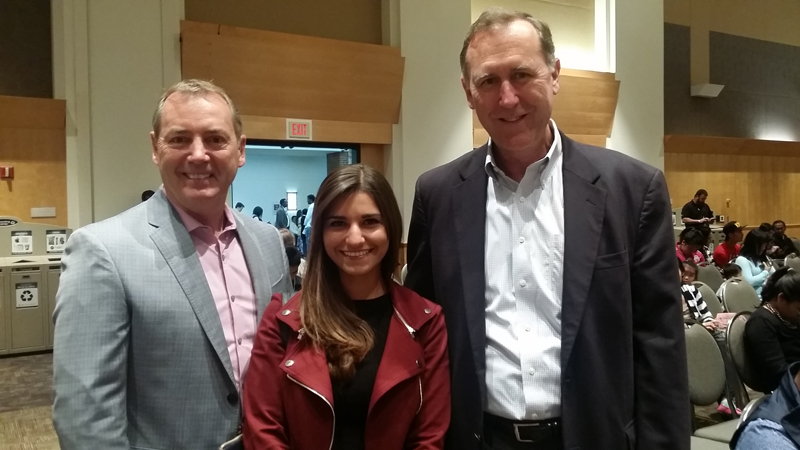 On each new citizen’s chair lay an envelope with a folder with instructions for obtaining a new passport as well as the Naturalization Ceremony program. 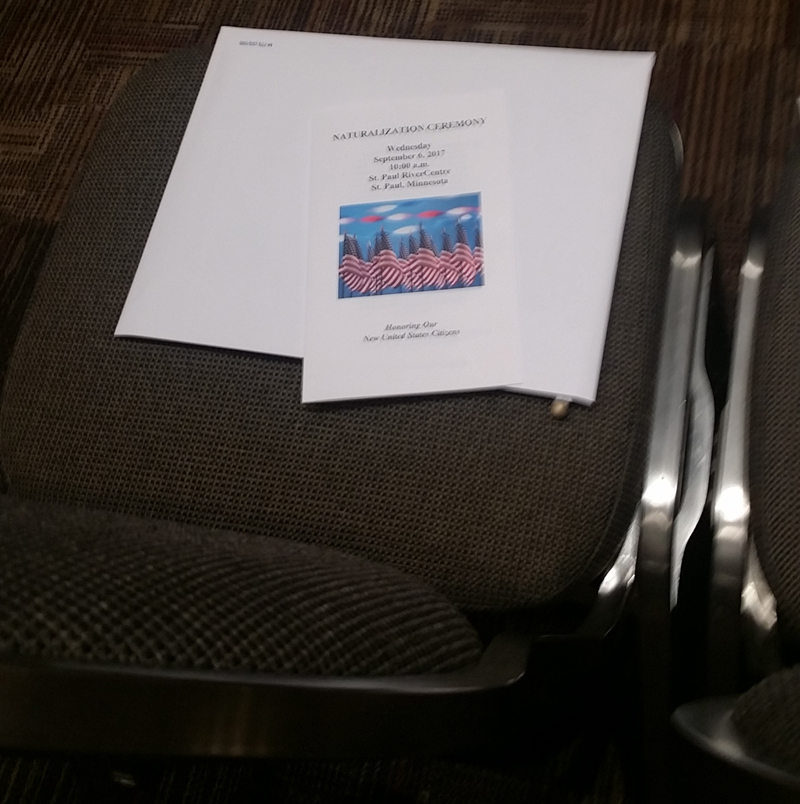 Joe and I took our seats.  The longer we waited (nearly two hours) the more the audience grew festive and expectant. People around us waved American flags, took pictures of each other. Recordings of patriotic songs played, everything from Lee Greenwood’s, “Proud to be an American,” to John Philip Sousa’s, “The Stars and Stripes Forever,” to the Army Air Corps, “The Airforce Song,” more widely known by its lyrics, “Off We Go into the Wild Blue Yonder.”
A few weeks earlier, our families had met one another and celebrated Val and Rodrigo’s passing of their citizenship test. I think we all expected the oath of citizenship would take some time so we were thrilled to hear she had received a date and time for her oath ceremony. We had fajitas and Val’s mom made Arroz Relleno al Horno (Baked Rice). It was a delicious meal and incredible to hear the story of Val’s family and the hardships they have endured for hearing them made me appreciate the Naturalization Ceremony all the more. 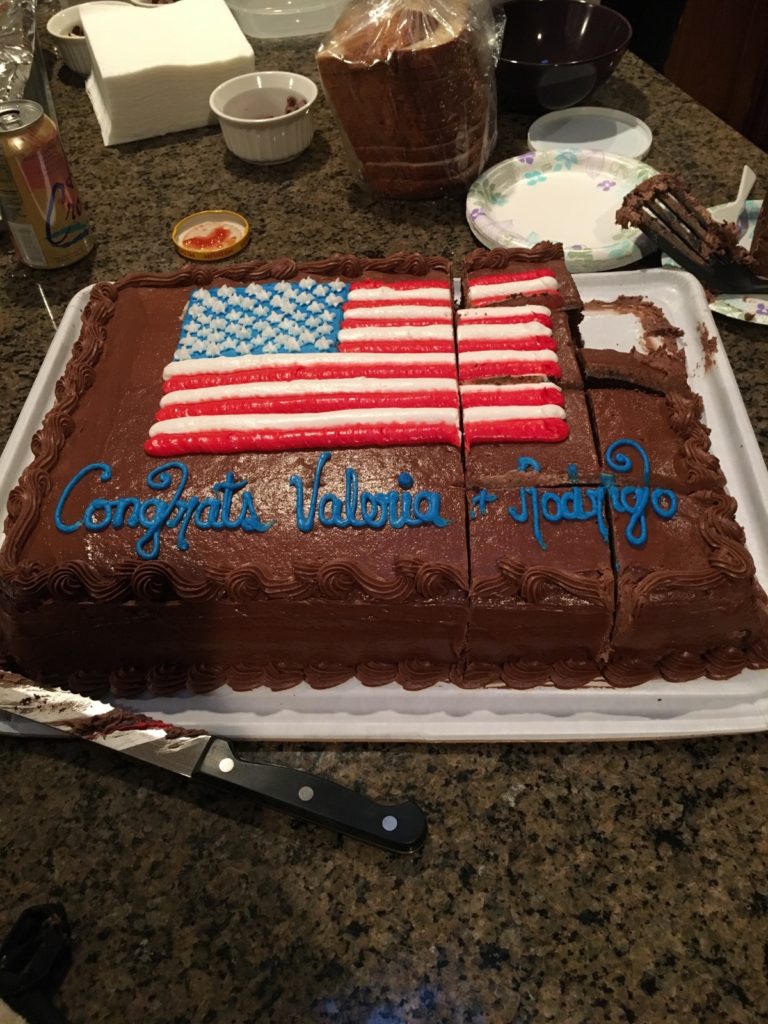 As we can see, some of us get a little excited over chocolate cake. 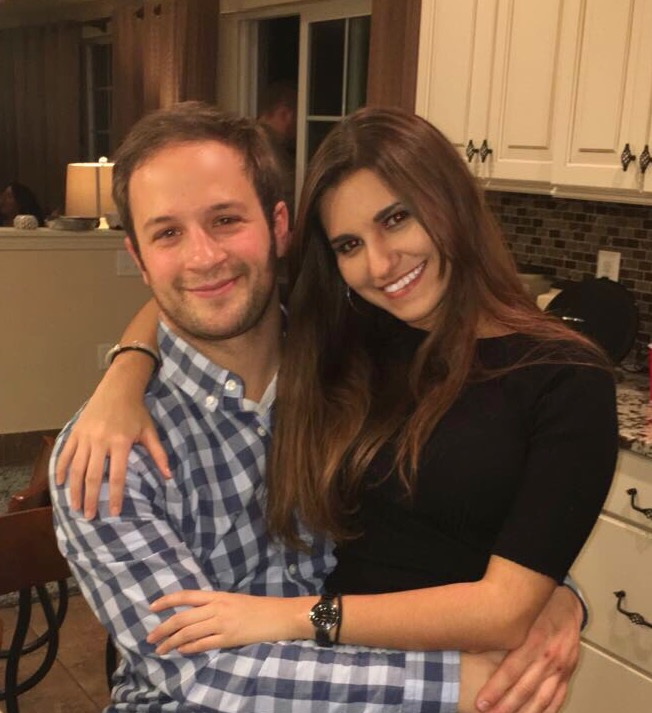 Just before the court was deemed in session, men were asked to remove their hats unless for religious reasons, and we were told to rise as The Honorable Judge John Tunheim took the podium and that court was now in session.
He began, “We are the federal court that covers the entire states. All over the country on this day, people just like you are becoming citizens. For about the next ten minutes or so, you are the country’s newest citizens….”
He asked us to stand for the National Anthem and then continued,
“We are a colorful society, with faces and shapes of many colors…”
He encouraged the 878 people from 91 countries with these words, “You could be our guiding light to overcome what is ahead…” then gave wonderful words for them to take with them long after the ceremony.
“Each of you is valuable to our country…”
“I praise you with respect…”
“I encourage you to participate in elections – we want to keep our arms open to all people…”
“Thank you for choosing America, for becoming an American citizen…”
Together, the entire ballroom (there were just as many in the audience as those becoming citizens) recited the Pledge of Allegiance.
Judge Tunheim gave a personal story of his grandmother coming to America because there “was opportunity here” when she was twenty years old and newly married. She went on to have twelve children and she told her children that she thought of herself as “a Norwegian contributing to America.” Tunheim encouraged the new citizens to embrace that attitude. “Don’t forget your heritage. I like to think America is better because of immigrants,” he said.
Here’s a partial list of some of the countries represented. (Forgive me for the countries I missed. I couldn’t write as fast as he named them.):
Afghanistan, Argentina, Austria, Australia, Barbados, Belarus, Congo, Ivory Coast, Cuba, Democratic Republic of Congo, Haiti, Indonesia, Madagascar, Sri Lanka, Malaysia, Paraguay, Switzerland, United Arab Emirates, Eritrea, Zimbabwe, Zambia, Nepal, Poland, Sweden, Tanzania, Venezuela, Canada, Chile, Germany, The Netherlands, Peru, Thailand, Ecuador, France, Honduras, Israel, Sudan, Moldova, Brazil, Korea, China, El Salvador, Gambia, Guyana, Pakistan, Bhutan, Cambodia, United Kingdom, Philippines, Nigeria, Vietnam, Liberia, Lao, India, Ethiopia, Mexico and Somalia.
One particular line Judge Tunheim said, gave me pause. “You have sacrificed and overcome adversity to be here.”
I know for Valeria and her brother, this is their case.
“Most people in Latin America usually want to go to college somewhere like the United States or Europe,” Valeria said, “but my mom was considering everything, like how safety can be a concern in El Salvador. She wanted us to come to America. Most people who move to the U. S. are looking for a better life.”
For Valeria, 25, who has been in this country for a number of years now, having a better life meant having to live apart from her mother for almost five years. Not an easy reality to be faced with when you’re sixteen. Her family, with whom she is still very close, helped her through her growing up years. 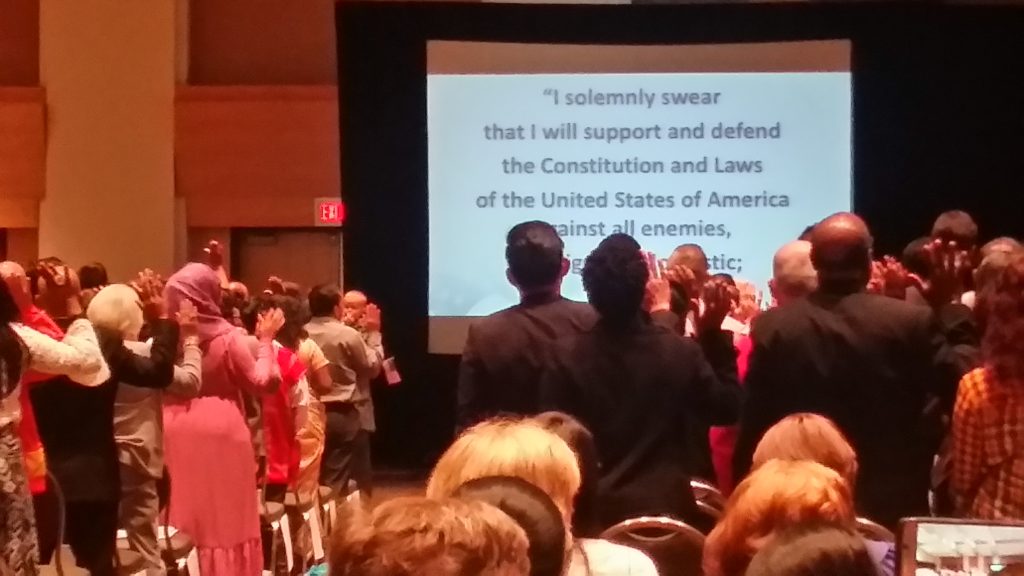 Thus this day was of tremendous meaning to Val and her brother as they raised their right hand and took this oath:
“I solemnly swear that I will support and defend the Constitution and Laws of the United States of America against all enemies, foreign and domestic; that I give up and surrender any allegiance to any king, queen or prince, or to any state or country, which I have held up until this day. That as a citizen of the United States, I will, when lawfully directed, bear arms, or perform non-combatant service, in the armed forces of the United States,  or I will, when directed, perform non-military service on behalf of the United States. I take these obligations freely, without any purpose of evasion, and declare today, that I am a citizen of the United States of America.  SO HELP ME GOD.”
It was a beautiful, dignified ceremony, and I am so glad Valeria invited me to come and celebrate her oath of citizenship. Congratulations, Valeria and Rodrigo! You make me proud that I’m an American. 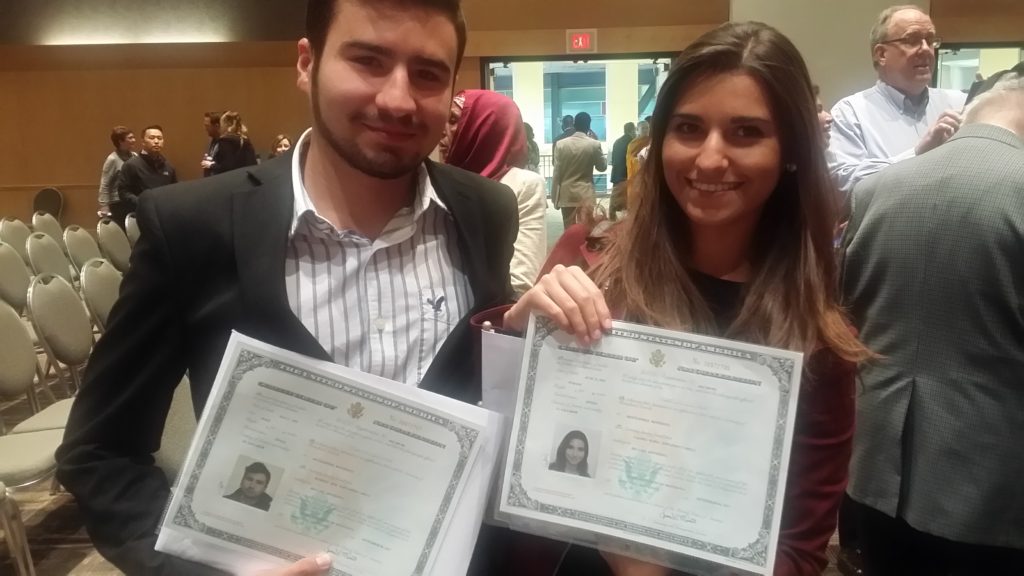