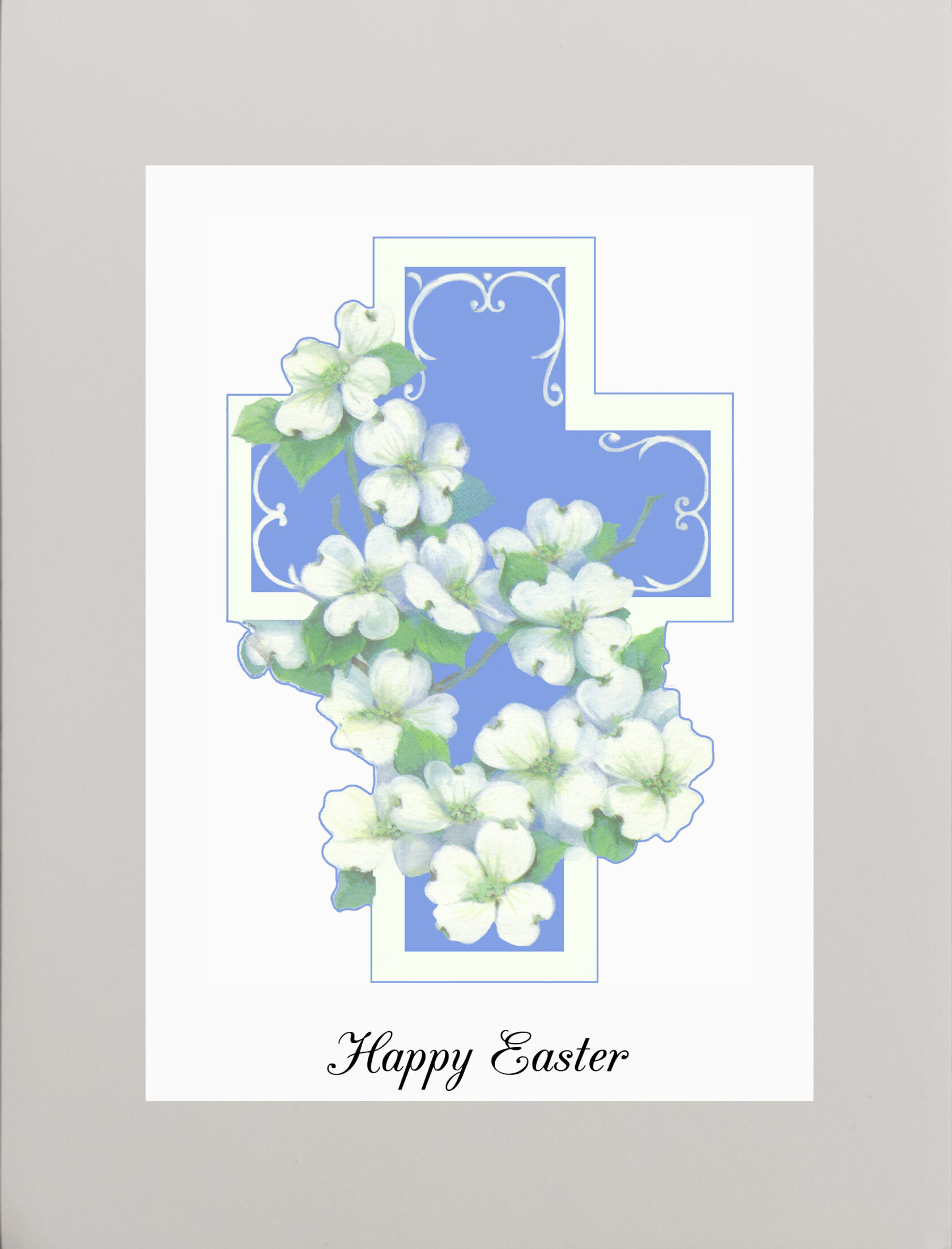 By having an Etsy store, I have made connections with people whom I would not have otherwise. I’ve also learned the importance of adding tracking with the Postal Service during holiday seasons – particularly in December. Mail going “lost” is very much a reality. With it comes the responsibility I feel as shop owner of juliesaffrinsstuff, to resend people their purchased items with the cost on me.

I have no regrets though. I’ve met some lovely people in these interactions. While I added British Christmas cards in 2019, in 2020, I created two new Christmas cards, One in French and one in Italian.

One person in Michigan ordered an Italian Christmas card. Two weeks passed and he had not yet received it. I sent him a new card. His response was lovely and funny. “Thanks for the card. It is beautiful. Unfortunately, it is in French, and I can’t read it.” Yeah, it’s sometimes hard being me.

One woman, Josephine, from Howell, Michigan, ordered quite a few Italian Christmas cards. She was lovely to work with and complimentary of my cards. “Do you have Italian Easter cards?”

Her question spawned a whole new line of cards in my shop. 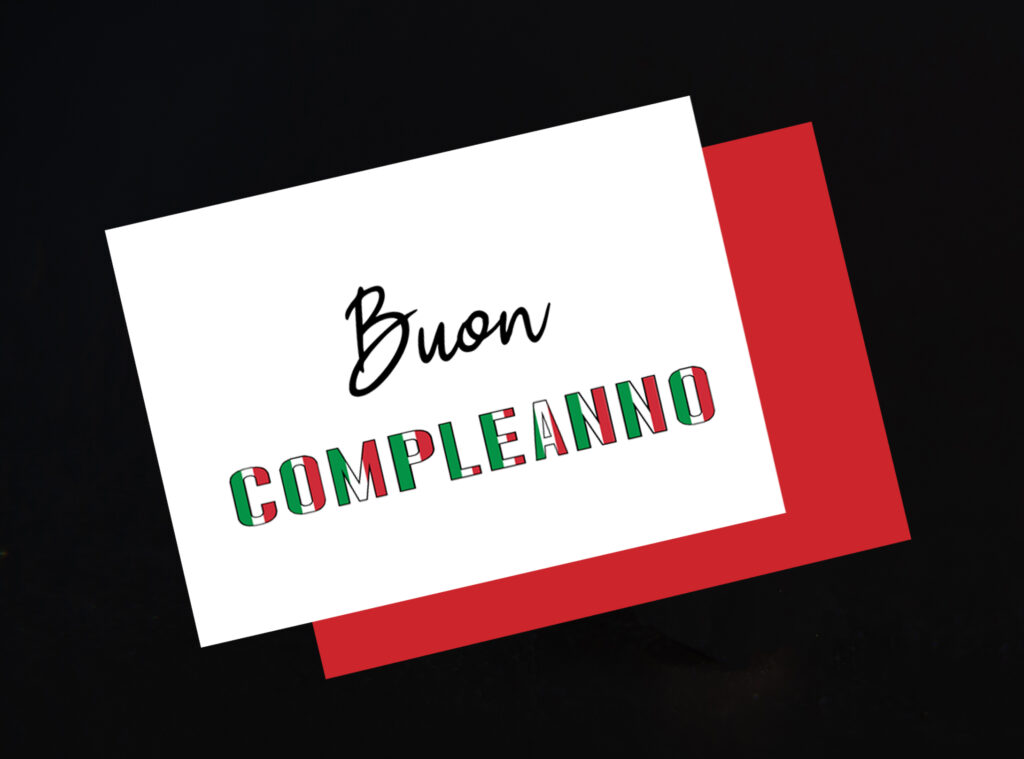 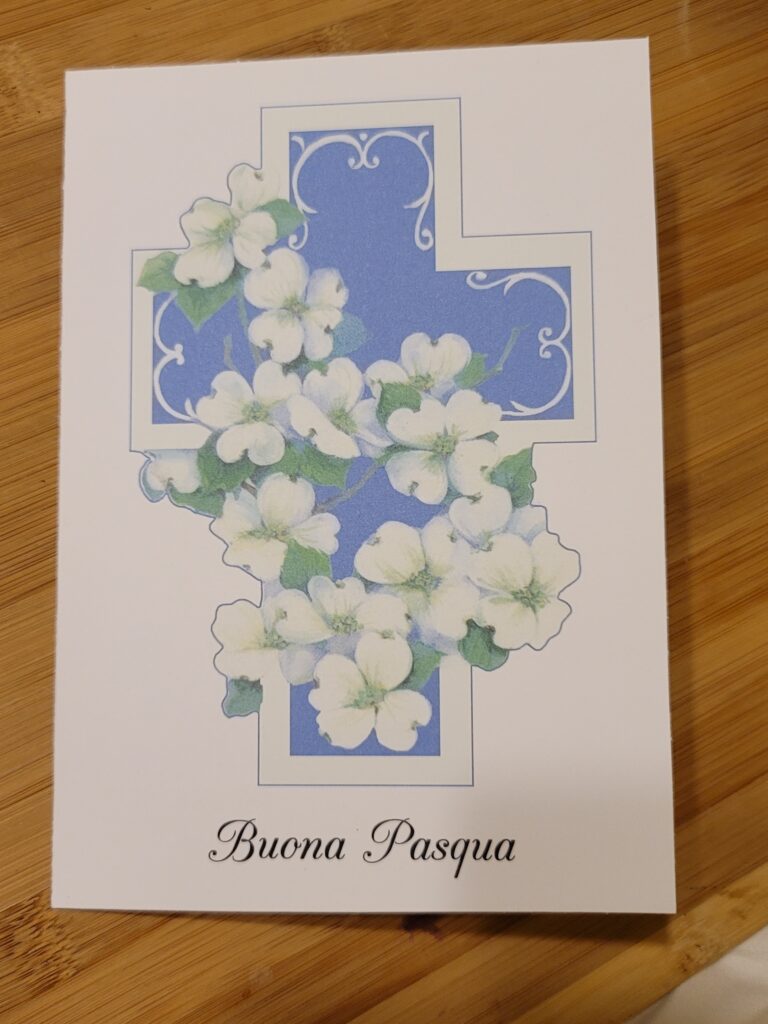 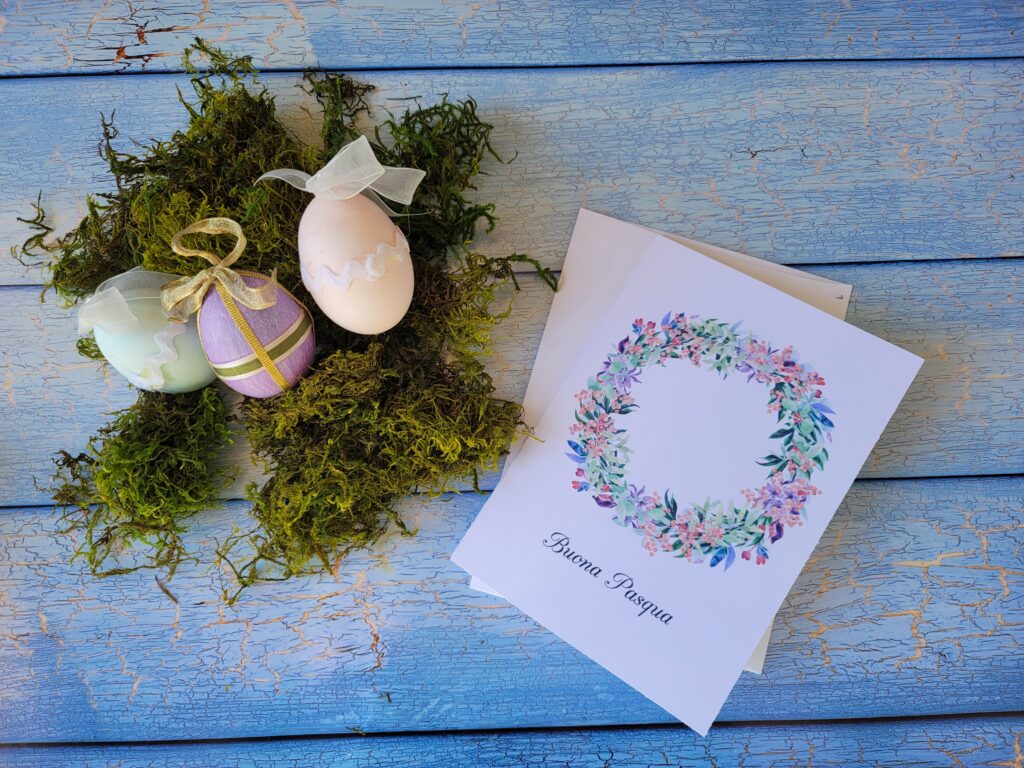 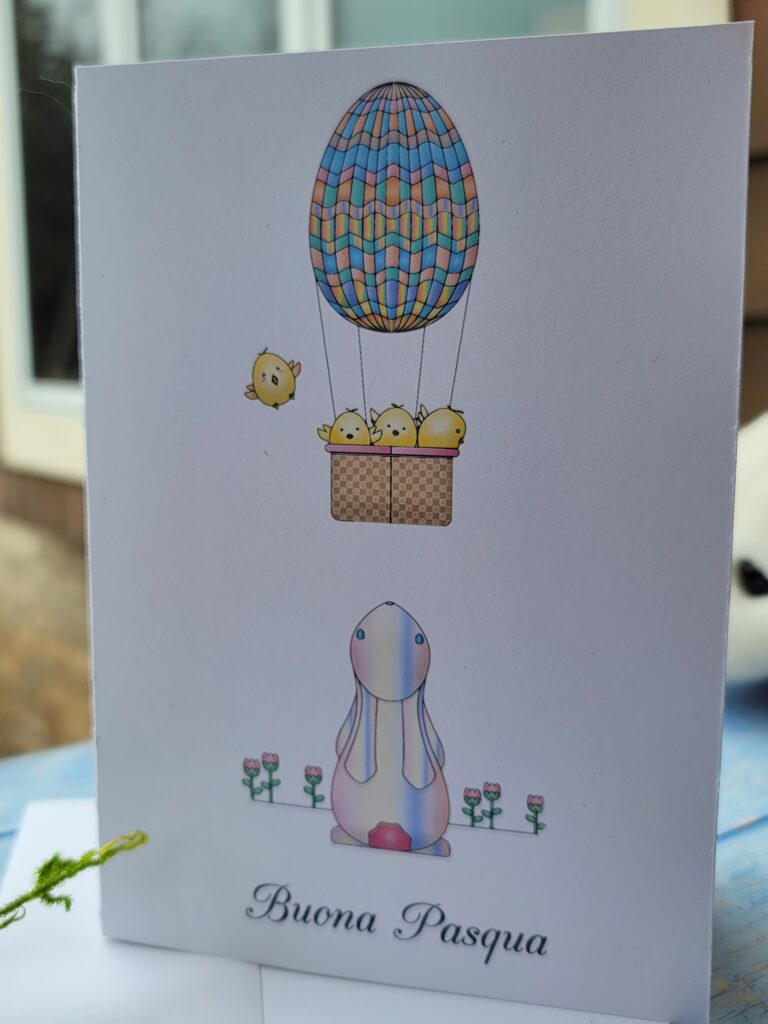 However, what to put inside the card? Do I trust Google Translate to get the phrasing right? I didn’t dare use that as my only resource.

For research, I joined a Facebook Group of Italians who make posts about Italian food, culture – you name it. What a wonderful group. I finished creating the Italian birthday card. But, I wanted for my Etsy listing, to stylize the card around an Italian cake or whatever Italians serve at birthdays. So, I posted on the group what I thought was a simple enough question: “What do Italian serve for birthdays?” More than 778 comments later, I learned Italians mostly serve whatever the birthday person wants. One person replied. “This is a joke, right? Do you join other Facebook groups from other country’s cultures and pose the same question?”

I replied in innocence, that I was doing research and that I wanted to get it right. I also told him that I had learned from Jo in Michigan, that Italians from previous generations celebrate birthdays differently.

Here’s Jo’s story about her parents. I share it, with Jo’s permission.

My father came to America in 1936 or so. He escaped from Mussolini’s army… so when my brother, sister, my parents, and I, went to Italy in 1973 (only that one time have I been there), it was a totally different country to my father! Even our dialect phrases that we learned from my dad were so old-fashioned that our relatives, in their 70s, barely recognized them.

My dad always said that they did not celebrate birthdays in Italy. He said you considered you were a year older when the New Year came. But, again, he was born in 1914 and came to America in 1936. He had no mother. She died when he was about four years old and his father was in America already living in Pontiac, Michigan, working in an auto factory and sending money back home to Italy. My father was raised by an aunt (but she had a family and apparently, he roamed the town a lot), and all the old ladies of the town said, ”He LIVED with us all the time.” So, what did he know about celebrating birthdays?

My mother was born in Nashville, Michigan. Her parents both came from Italy … but again, same story. She was born in 1916 in Michigan and her parents were already in America. They left Italy before 1916. I doubt they had much in the way of birthday celebrations in her family. Mostly, all they did was work.

My mother bought us birthday presents, but we had nothing like an actual birthday party. My mother’s favorite thing to do was to send us to the store down the street and we would tell the shop owner what we liked. Then my mother would go down and talk to the owner and buy us a couple of things that we told her that we liked. (Small town!)

One time my sister had a birthday party … an American-styled one with girls from school. I remember that. We had a small confectionery store in downtown Brighton, Michigan, and my girlfriends and I used to walk downtown from school and eat lunch at the counter in our store and then walk back to school. (Lunch periods were longer in those days.) One time, to my absolute surprise, my mother brought out a birthday cake during the lunch hour for me and my girlfriends to have with our lunch. That was the extent of the birthday celebrations that we had of note when I was growing up.

It was nothing like the multi-generational birthday parties that we have so many pictures of for my three kids. Big bashes! Big pasta dinners! Then, when our children were of school age, we used to have parties as well for their friends. Overnights with girl friends, that type of thing. Taking them all to a movie. Stuff like that. So, my kids should have memories for every year of their childhood of both a family big dinner and also a “friend” party! Much, much different than what I experienced … not that I feel that I was neglected … the expectation was just different.

Jo’s story about her father and mother was eye-opening for me. I’ve taken so many of today’s generations and gatherings for granted. Thank you, Jo, for sharing your family’s story.

One woman in the Italian Facebook group has her own YouTube channel. Her name is Alessandra and she lives in Australia. Her channel is Alessandra’s Food is Love. Her recipes are amazing and her explanations of how to bake or cook have the kind of details in them that help you to beautifully replicate the recipe. Here’s the link address: https://www.youtube.com/channel/UCGlmjuaaUIIfaZQX3drwGRg.

Alessandra responded to my Facebook message that for her mother’s birthday, she made a popular cake that Italians serve for birthdays. It’s called Torta al Rum or Rum Cake. If you do a search for her YouTube channel, you’ll find the video under Rum Cake – Torta al Rum – Rum Cake recipe from scratch. It looks scrumptious. Here is the video: https://www.youtube.com/watch?v=B-rKtolEnGg

So, I found a Rum Cake image and used it for my Italian Birthday card, but I still needed answers as to how Italians celebrate Easter as well as what to say inside the greeting card. Back to Jo and Alessandra I went. I learned that Italians take Easter very seriously in the religious sense, but also, that bunnies and chicks, more than the Easter bunny are a part of their Easter celebrations.

I created three cards with Jo and Alessandra’s immense help. It is a good thing I asked Alessandra, who speaks and writes Italian, about my Italian translations, for I had one phrase wrong. I learned that if you are sending a Buona Pasqua card to one person, the words inside must reflect that. “You” is different in singular versus plural usage.

I have also created some Easter cards in English, and they are up for sale on Etsy. 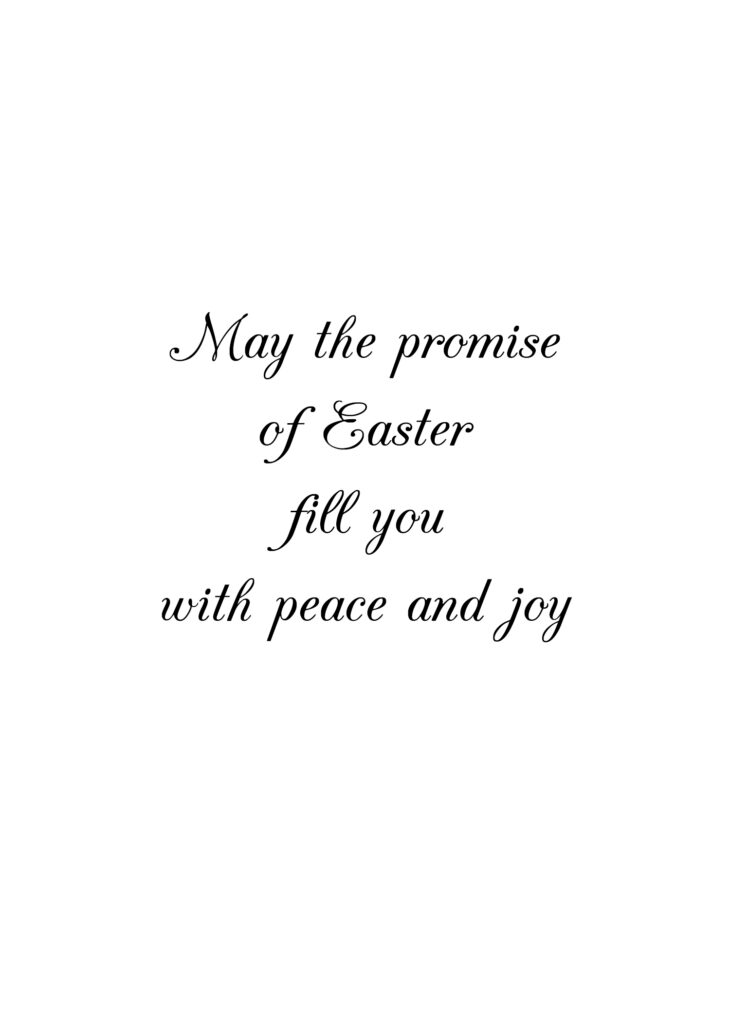 No problems with “you” usage there! 😊 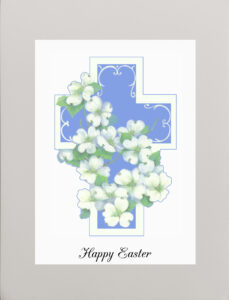 I am particularly pleased with how the cross Happy Easter card turned out and it is based on a 1935 card that my grandmother received from her friends. 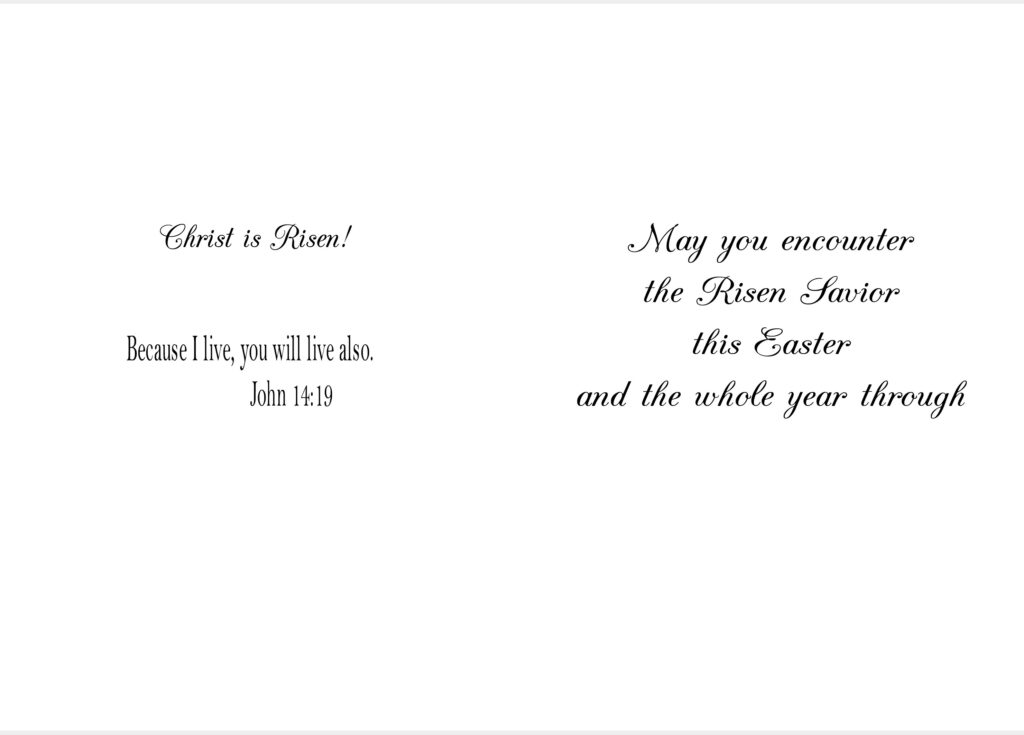 Italians are known to make Italian Easter bread as part of their holiday celebration. The bread is braided, shaped into a circle to resemble a crown of thorns in remembrance of the crown Jesus wore at His crucifixion. A dyed Easter (to symbolize new life) is placed in the center of the bread, uncooked (it cooks in the oven as you bake the bread). Here’s a version of this special tradition. (Note: I have not tried this recipe). https://www.youtube.com/watch?v=STuOXAUDCB0

Lastly, Jo told me a cute story about her mother.

My mother always had a saying. If, for example, she asked you to do the dishes and she went back in the kitchen later and you hadn’t done them; she would say “What happened about doing the dishes?” Then, you, as a teenager, would say, “I’m coming!” She would say, “So is Pasqua.”

Thank you, Jo (and to Jo’s Italian neighbor Gina) and Alessandra, for all your assistance in helping me to create Buona Pasqua cards. It’s been lovely to make your acquaintance.